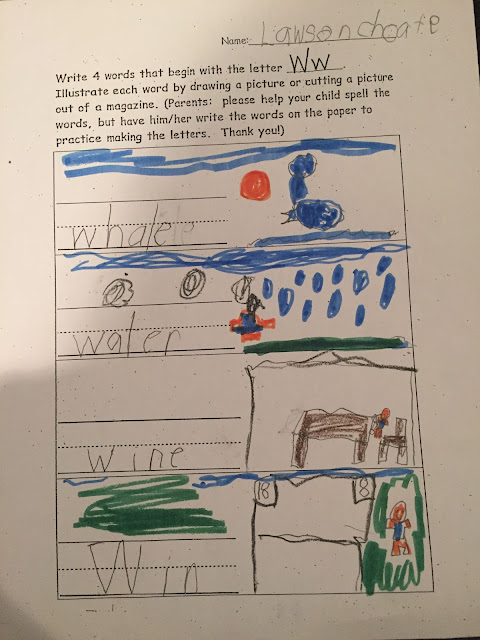 It started as an innocent homework assignment. One that was easy enough for him that I didn't have to help in any way other than nab the crayons from the mud room.

On the scramble to the car, my eye caught a certain worksheet word as it was forcibly stuffed into the camo back pack. Yep - you see it. Line three.

"Wine." And an innocent lady sitting all alone at the table.

"Laws - tell me more about this word and picture on line 3? It's very nice, but I'm concerned that Mrs. G may think it's not appropriate for school since kids are not allowed to drink wine."

He goes on to assure me this is an adult (read: his Mom) and the he will share that with Mrs. G.

The first chance I have to write Mrs. G is close to lunch, which is ok, since she's been teaching for nearly 30 years. Surely she's seen some of this debauchery in her long career...

The email is sent, explaining we frequently have guests and family over and indulge in healthy amounts of the good grape juice. Her response:

"Thank you for letting me know. I did see his 'W' homework and he pointed it out to me that there was an adult sitting at the table with a glass of wine. So no worries. The adult looks like a very responsible wine drinker." End: smiley emoticon.

Mrs. G  - she gets me. I mean, to teach Kindergarten, a solo wine drinker at the kitchen table cannot be a foreign concept to her.

And, as my principal friends reassure me, it's better than another four-letter "w" word he could have written...

Ping! "Sneak Peek of the Summer Collection," my inbox screamed at me. Seeing it was from none other than Kendra Scott, it had to be opened, teleconference or not.

And deliver she did, once again... 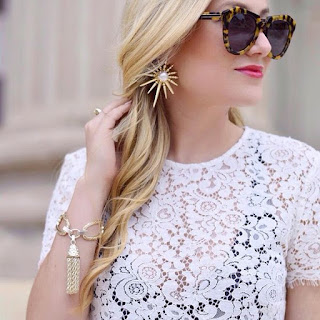 Gold trimmings, sunbursts, vibrant colors, pieces that can be worn multiple ways...swoon!!! At a recent stop to the Plaza location (shout out to those fun girls!), I walked away with these little beauts: 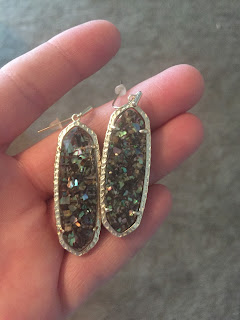 I had no business purchasing them and nearly made it out the door, but won't they be fab in Meh-he-co in a few weeks?! Add the necklace and I'm be really set to go.

Thanks to the most giving girlfriends and a few investments of my own along the way, I have about six pieces that are core to any outfit. With her style on hand, I never have to try and piece things together or guess what looks good with what.

And did you know they host small and large parties?! So grab your favorite girls, request your bottle of wine and start daydreaming which stones you want placed into your favorite baubles. 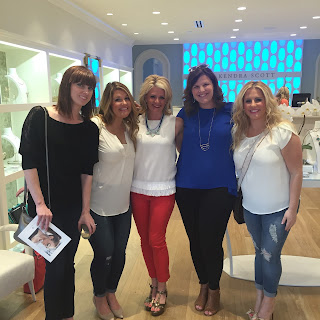 So if KS isn't part of your regular ensems, stick it on your Mother's Day list or just go splurge yourself. It will be worth it!

The Road to No Rails 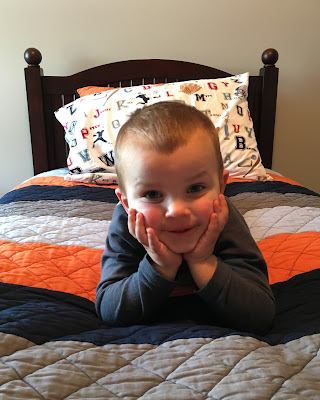 I think his response sounded something like a grunt of gratitude, for any "stuff" that leaves this house only delights him.

Seven years ago we shopped for that crib, running our palms against the different woods, dreaming of  snuggly nights perched in a glider, a burrito of a babe tucked in our arms. For hours we dissected spindles and heights, espresso vs. eggshell, contemporary vs. traditional. No drop down of course. Invest or save. Transitional or no.

Weeks later it arrived in all of its espresso glory, fully assembled and ready to hold all of our dreams come true.

Nearly four years later, a few teeth and kick marks worser for the wear, it protected the second son who stole our hearts.

And now, here it sits, leaned against the study wall, ready for it's next baby to have and to hold. Love and protect. Serve as a play thing. Take a licking or two. This crib...

Tossing old onesies, donating no longer loved toys and removing all that's been outgrown has generally been an easy task, making room for the new and exciting while the rest was captured in pictures.

The road to no rails has been an incredible one. I'll never forget all of our sleepless nights, leaning down into it to grab the loves of our lives, their faces as they peer between the bars for the morning greeting, the peeking in to find them more peaceful than you ever imagined...

So that rocker. It's gotta stay for awhile. Because that crib...