"I don't know E, I feel so blech...something's gotta get jazzy or this gal is going to loser her mind."

We were entering into spring, but the first two weeks hadn't meant so much tulips as it had rain showers and not a higher temp to be found. Things were intense at home, all self-care had gone out the door and work hours never cease. So the answer to this reduction of stress could only be: 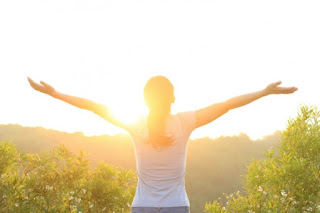 Since there are always Oreos and wine in the house, first up was highlights. Given I'm a gal who is pretty lucky not to have any of those pesky sparkles yet, I was a bit torn if taking the time and spending the money was worth it. My natural hair hadn't been touched in nearly a decade and had it's own version of hombre. It had finally gotten to a longer length where I felt feminine and could be a bit creative with it. And most mornings I could hop out of the shower, throw some Diva Curl in and call it good. So why mess with a good thing?

The fabulous Susanne of Stem Hair and Body did her thing, foiling in strategic but random parts of the head to give that beach glow (she has a name for the process). Not to blonde, not to caramel and just the right gold, I left feeling a few years younger with the good kind of sparkly framing my face. And although I missed a bit of the length, it had gotten a bit mullet-esque, so now we're on a good path to growing a little less layered. That night I slathered on some Rodan and Fields tanner, and I appeared at work the next day looking rested and ready to be productive. A perfect front.

Next up was splurging on a beauty product. My tolerance for anything that has to be maintained or takes more than 3.5 minutes is minimal, so I was immediately drawn to R&F's new Lash Boost. Two simple swipes at night and you're off to bed. Just two weeks later, I had a few longer lashes (I practically have none) and felt a bit "prettier" and more feminine as well. My friends had seen amazing results - almost to the point where they had to stop using it or give up their glasses. Unfortunately, my super sensitive eyes (I mean unusually sensitive) never quite adapted and kept reddening, so my dream of what my lashes could've been had to come to a quick close. I tried! And still highly recommend. If you're not already living with one of their face regimens, it's time.

Finally, a little mani/pedi time, which is always good for the soul. Le Reve in Park Place is always worth the drive, leaving your feet baby soft and carrying June Bride (sparkles!) and #92 (perfectly fun purplish/bright/neutral). Even better is when me and the gal pals pile into HH's clean car on Fridays and hit Lovely Nails on 75th, squealing over colors and swapping stories about the week. Wrap that up with a trip through Chick fil A and life is good.

What makes you feel lit and feminine again when the blahs strike?