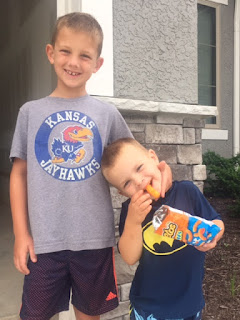 "Alright buddy, what do you think we should stick on the list this year?" I asked our oldest, a rainbow of markers laid out on top of a stack of white paper. It was late May and per Choate family tradition, it was time to put forth our wishes for the summer ahead.

The six-year-old's looked something like: go to Scheels, swim 100 times, Worlds of Fun, plant a garden and have a water gun fight.

His mom's looked a bit like: learn to tie shoes, ride a bike and swim. Oh, and have oodles and oodles of fun in the way of later nights and starlit picnics.

I'm happy to say, we accomplished nearly all of the above.

Sitting here on our moonlit porch, the cooler breeze swaying overhead, I marvel at how extraordinary our ordinary was this summer. The conversations we had on the driveway. The snuggles on the outdoor couch. The laughter that started at 6 a.m. and was still very real more than 12 hours later. The friends we met for hours of water fun. The sports we played in the sweltering heat. The dozens of small soirees we had in our new home. The pilates we did by the poolside. The shows we caught in parks. The farmers' markets we visited for fresh flowers. The wishes we made in fountains. The pals we met for happy hours. The bubbles we ran in for a 5k.The trip to the lake and MN, long walks with the dog and endless family fun.

As of yesterday, the Big guy has a new pair of Nikes he promptly laces himself. He swam a 150 yard breast stroke and practically did the 100 IM in the neighborhood pool. Not to mention the near hour he looked like a little Lance out there on the track on his new 20" wheels. Just mere months before, this was all just a twinkle in our eyes.

And the little one - he's thriving at a new school, finding new ways to say hilarious things and giving the warmest of hugs that any stranger would even long for. His feet are two sizes bigger and his heart is still the size of Texas.

So as we tuck in our first-grader this evening, kiss our preschooler on the head, and share a moment of silence, may we always remember this season full of promise come true. We feel like the luckiest, most grateful people in the USA.

Now that's a gold medal kind of summer. May yours have been the same! 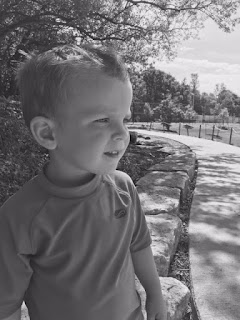 "Yeah, I'm not sure what all it includes, but her pics sure looked like her boys were having a great time," I said lightly to the husband as we worked to convince our own sons that wrestling time needed to move to the great outdoors. It was 10 a.m. on a Sunday and they'd been up since six. In our house, this is the "witching hour," where snacks are needed and enough playing has already happened that it's fight or flight for the parents. From here it's either take them out to run them ragged or pretend you can accomplish chores without screaming at one another or locking yourself in the bathroom.

Shrugging a sling bag over my shoulders (water, 'screen, shoes the toddler won't put on, change of clothes, snacks), we loaded into the car and headed south, answering questions of how far we were on our journey and pointing out every digger along the way. Twenty minutes later we arrive, a blue sky lit against a rainbow of primary colored metals and ropes. Not to mention natural looking logs, springs of shooting water and gaggles of people with smiles plastered on their faces.

For parents with young kids, this was utopia.

The boys squealed with delight, forming their plans of what they'd tackle first as they raced their way toward the fun. Parking was easy despite the large crowd and each child seemed to have went for the water first, delighting in the anticipation of when each pop of liquid that would head their way. Next, the big guy went for the unique swings, all perfect for his size, comfortable and new. The two found their way to a sort of merry-go-round next, aiding in their parents getting in a few extra steps on the fitness tracker as well. Best of all, they spent nearly an hour in the "nature walk," a small nook where they could toss rocks, poke sticks, dig in the sand and pump water down a cascading fall. It was a camp ground right in the middle of suburbia. 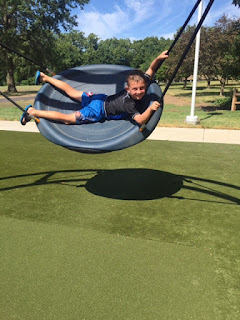 Two hours later, it still took some bribery to pull them away. Couple that with a couple of rumbling tummies and a favorite restaurant up the way, it wasn't too difficult, but moments after the meal finished, they were asking for the park again. 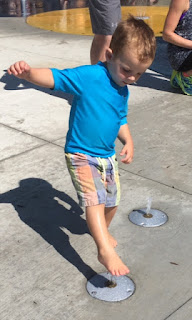 Twelve hours later the Big and I returned as a sort of last day of summer soiree, where he spent hours speed racing his way around a track big enough for a six year old to feel like an Olympian and small enough for a mom to feel secure while she lounged in the sun nearby. A tear escaped my eye as I marveled at what the summer had brought and the joy that was this park. So much laughter. So much sunshine. So much joy.

Thank you, Overland Park, for bringing us this little gem. And friends, let's meet at Roe Park soon, shall we?