Like a little holiday wish the day before vacationing from my career for a week, my workplace issued we travelers the iPhone 5: 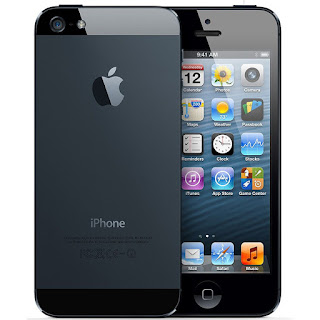 Then Santa went bananas and spoiled me rotten with the iPad mini: 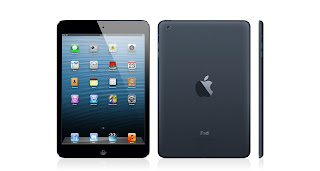 i'M hooked. Totally pumped. And geeking out over these gadgets. Steve Jobs: you are one mechanical genius changing this world one iDevice at a time.

PS: I pimped out (is that even cool to say anymore?!) the phone with this little sparkler: 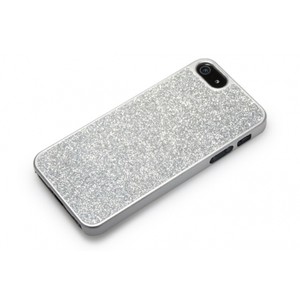 Any unique tips or ways you use these iThings? Favorite aps?

Here's to sticking to my no iDevices while the child is awake situation. Better put that on the resolution list for 2013-these things are addicting!
Posted by Meg at Sunday, December 30, 2012 No comments:

"Yah, I've got the saline spray, Pickles and his cars - let's roll," I said breathlessly, struggling to drag a 50 pounder with a 30 pounder on my hip. With our whole family stuck with the illness, a four-hour delay at the bland KCI and nap time nearing, the holidays not all the way planned and unfinished business at work and home, we weren't sure if the trip was off to a good start, but kept our spirits positive nonetheless.

Good thing we did because the trek and time there were simply marvelous:

Laid back hours with the sis-in-law's delicious cooking. Warm hugs from my brother who I think about constantly, but could never see enough. Time with his in-laws who are incredibly warm, caring, sparkling and a reminder of what family really means. A run in with a faux Santa who'd had a few at the local pub, causing tears of laughter at our child's grimaces and threats of concern regarding his behavior. Balmy weather that meant no jackets in the brisk air as a soccer ball was kicked for hours and giggles heard during playground races. Watching my brother and SIL blossom into little parents, assisting, laughing and cuddling with our son. My first trip to IKEA (swoon!!!) where all my retail dreams unfolded right before me, and L2's nursery started coming to life. Laughs over the character-filled BearC pup that belongs to the SIL's family. Early wakings with waffles, scrambled potatoes and calm routines that came so easily as if our family did this every day. Even one night in a generously comfortable bed all to myself - it was all quite a treat. Easy, light traveling with little dude who we dubbed one of the greatest pre-school travelers around. Constant reminders of how important an uncle and aunt will be in his life. 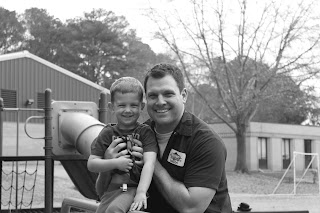 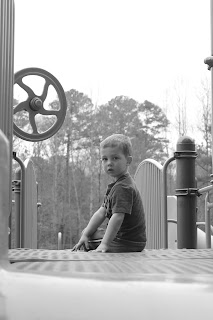 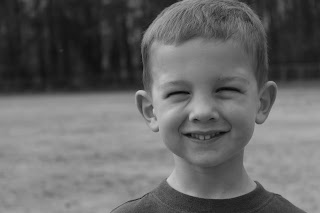 It was all magnificently magnificent. Ordinarily extraordinary. And a time we'll never forget.


Thank you, Ryan and Erica and the Hein family for a holiday before the holidays and reminding us what it's all about. We love you!

Magic for the Wee Ones 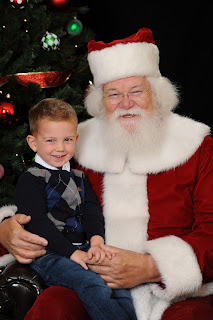 Want to blow your little one's mind with a free, personalized video from Santa? Try this!

I can't wait to see his face...it may be the best gift of all this season!

PS: you can see your house in a snow globe too. What will they come up with next?!


Tonight marks one of my favorite evenings of the whole year - the cookie swap with the girls! Thanks to Pinterest, the above recipes (that align nicely with my non-domestic skills) will be my contribution to the festive feast. Can't wait!
Posted by Meg at Wednesday, December 19, 2012 No comments:


Days have passed and yet I still can't find the words, so instead I share this.

Still heartbroken. Still speechless. Still a mix of emotions that can barely be felt and must be left undescribed as I'm uncertain if there is ever enough healing, support or love that can conquer the loss of a child. Sure glad the good people of this world are leaning on higher spirits and trying though... 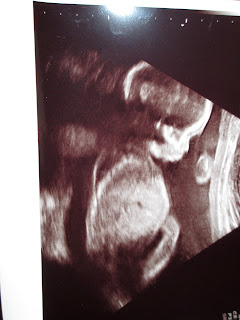 Liam Emory Choate, expected to arrive via stork (I wish) in April 2013.

Our first "L" is still working on how to pronounce it and prefers to just call him "Emily" for now (backwards?). Or some days it's Darth Vader or Preston...

We can't wait to meet you, Mr. Liam. You, your healthiness, acrobatic legs and all.
Posted by Meg at Saturday, December 15, 2012 No comments:

Rokuin' Round the Christmas Tree

During our recent visit to the ATL, my little brother learned more about "Curious George" than likely he ever intended, passing the morning hours until the sun poked beyond the Georgia horizon so we could head out and enjoy the balmy southern air. And it was all thanks to this little device: 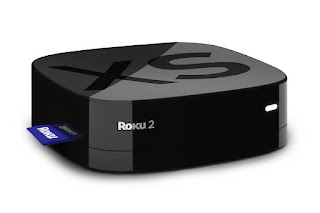 The Roku. A streaming player that instantly downloads pretty much whatever you want to watch from movies to sitcoms, Pandora to new releases. Bottom line: it's amazeballs.

And the best part? Uncle Ryan had the hubs' name in the draw this year, therefore this little beauty is already nestled right in the TV center console. After owning it just one week, we've learned about Tinkerbell, Daddy has gotten into his gangster movies after hours and I jumped on the "Parenthood" bandwagon that was so hot on FB this week.

So whether you need to treat yourself or find the perfect gift for just about anyone in the next week, Roku is the answer. Rock it around your Christmas tree!
Posted by Meg at Saturday, December 15, 2012 1 comment: 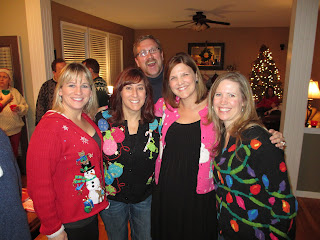 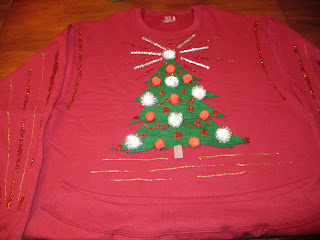 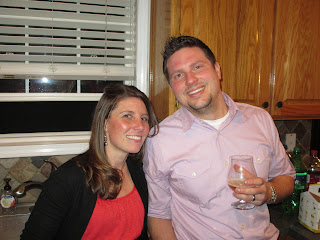 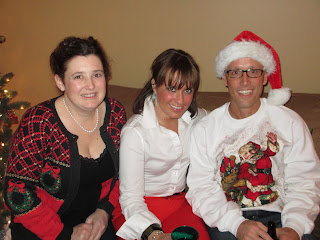 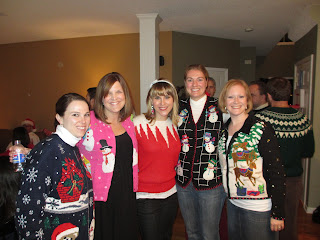 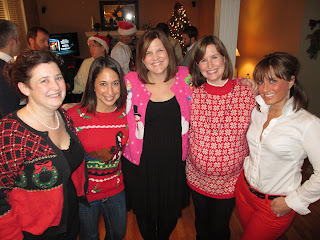 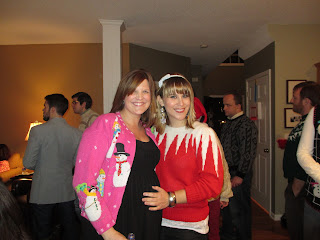 Five years of ugly sweaters. Three rooms filled with rockin' friends. One lifetime of people we adore, appreciate and love to celebrate with.

It happened. We've reached the point of welcoming the double chin, recognizing the bedunkadunk could be considered a double-wide, and falling even further in love with accessories because they're the only things that fit.

Which is why I returned from Chicago with four new pair of shoes. Oh, and what was probably more than six pounds of buttery, carmely, cheesey deliciousness the windy citians call Garrett's popcorn (likely one of the culprits that help aided above situation).

Speaking of finds, whether you're preggo or not, hitting the GAP is a wise choice if it's your kinda style. As one of only three outfitters serving the knocked up of the world, I was delighted to find that some new items had rolled in and given their push to hit the black during the holiday season, incredibly on sale. With not a penny to spend on such frivolous items such as clothes that fit and are comfortable at 20 weeks, I managed to score four dresses and a sweater for $110 bucks.

Seriously, a steal. And they're all the GAP comfort and quality you've loved since your years of wearing flannel and ripped boyfriend jeans in middle school.

So fall in to the GAP - you never know what finds you'll find.
Posted by Meg at Thursday, December 06, 2012 No comments:

Word of the Week 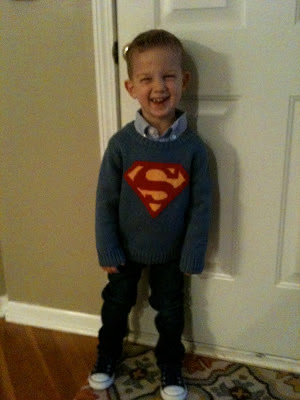 Truth be told, there’s been a fair share of sh*t that’s gone down in our household this week, from hosting a party, Elf on the Shelf phobia, a variety of illnesses, doctor visits, intense deadlines and preparing for a trip. Toss in round 4,875 of nausea (seriously, half way through and we’re still doing this?!), and a newfound love of waking every two hours and we’re operating at about a five on a 10-scale. So, a few complications, but it’s all good.

And let me be clear about one thing: though things got a little sh*tty for a few moments over the course of the last six days, we never talked about it. And we certainly never used the word. Which is why I was slightly surprised to hear the latest report from Miss Julie on how using our sight words at circle time went down this week:

“Ok, friends, which of you would like to come up and doing rhyming with one of our site words this week?”

Our son eagerly raises his hand being the good student he is.

So up he pranced and she doled out the word he was to rhyme with, which was “sit.”

You can imagine the outcome of this. Really Miss Julie – you were asking for it.

Stifling a laugh she played it cool as if the imaginary words the rest of the kids were making it up (adding syllables to real words, etc. – a three year old’s playground), they moved on without so much as one five year old even noticing. Shocking really.

Then the teachers had a good laugh in the lobby. I can only imagine the kind of parents they think we are now, particularly given I told her the recent golf ball sized lump on his head was a mosquito bite and didn’t sign off or (gasp) leave the dosage for the saline nose drops.

Hey, at least the kid can rhyme with the word of the week, yes?
Posted by Meg at Thursday, December 06, 2012 No comments: