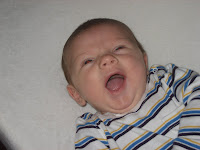 “Oooooo – look at all the pretty white coats!” I say to Lawson who is tucked neatly into the crook of my left elbow, his bright safari pajamas matching the walls of Children’s Mercy’s décor.

“Welcome back! How is he doing?” said Dr. S, a dermatology specialist we had grown to love for her soothing voice, warm eyes and understanding of Mom’s tears.

Mike and I shared a glance and filled her in on how well Lawson had been progressing since his diagnosis of Incontentia Pigementi (IP). Almost chuckling to ourselves that the room was filled with hopeful residents yearning to see something so rare, we began to tell Dr. S that his rash was now nearly invisible, his eyesight just checked out well and his development was right on track for a 7-weeker.

As we chatted on, you could see the eager-to-learn residents’ faces begin to fall, their cameras placed on the counter vs. gripped tightly in their hand to catch photographs of such a rare condition in a boy. The male resident particularly almost let out a huff as Dr. S undressed Lawson, laid him gently on the table and shown a spotlight on his now rounding belly.

“Oh my gosh – there is almost nothing there! And there are no brown streaks!” said Dr. S, her brow furrowed with both happiness and confusion as the presentation of IP was now presenting so differently than we saw her a month ago. As clinical words began to spout from her mouth, the residents in the room shifted their feet in what felt like disappointment while Mike and my grins grew wider understanding this could be a misdiagnosis and our little man could actually be a happy, healthy baby boy!

After discussing a few instructions, next steps and affirming that Lawson looked like his Daddy, Dr. S sent us down to genetics (thank goodness she could squeeze us in!). As the nurse came by with more evil tools, I stepped out as a tourniquet was placed on Lawson’s bicep now lined with little baby rolls from his healthy weight gain in the past few weeks. With just a few tears from Lawson, and miraculously, nothing but welling of tears in Mom’s eyes, we were on our way with lightened hearts.

What was anticipated to be another long, painful day a Children’s had now turned into hope and faith that our little man continued with his warrior ways and perhaps just had some rare rash that not even the greatest of the great, smartest of the smart could wrangle. Though the biopsy came back positive for IP several weeks ago, only genetics can tell.

So here we wait, patiently and excitedly, for testing, testing, 1-2-3. In four to eight weeks we will know for sure and our fate will be sealed by just a little bit of blood and chromosomes. Miraculous, isn’t it?

So please, send warm and affirming thoughts into the universe that this too, shall pass. Either way, our little guy will remain he adorable, rambunctious soul that is capable of anything. As we like to say in the Choate household – no limits! And may the sky be limitless for you and yours!
Posted by Meg at Thursday, November 05, 2009

Carla J says: "My thoughts and prayers are with you!"

This doesn't surprise me one single bit.
Lawson is in His hands.....and so is all of our hope and faith.
I can't wait to see what comes next.
I love that little man, and I love you, Megs.