Just to See You Smile 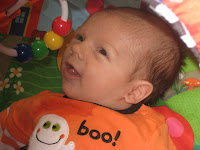 “I can’t do it today – I’m exhausted!” I whined to Mike as I groaned and pulled myself out of bed in a way that could only be described as “gumbyesque.”

“Yes you can – you’re a great Mom…” he half muttered half snored as he turned and settled back under the warmth of the down comforter.

Mumbling something about how men should be able to produce milk from their pectorals, I trudged to Lawson’s room aching to relieve his cries. Working hard to look at it positively like: “ I get to spend time with my son now!” vs. “It’s 4 a.m. – why is he waking me??,” I flipped on the soft blue lamp, skirted him out of his swaddle and scooped his warm little frame into my arms.

And that’s when the magic happened…

My precious baby boy, rosy from the warmth of his room and in a semi-state of consciousness, looked at me in a way that cannot be described, but only felt with the heart. Slowly, his slate blue eyes pried open in the shadows and my face began to register in his little mind. He looked at me in a way similar to what Ellie does from across the room (ok, and when she wants a treat too)…a long stare that can only mean “I love you unconditionally.” And suddenly, the tiny corners of his mouth crept closer to his eyes as a toothless grin was shot my way. He had smiled at Daddy and me plenty before, but there was something about this magical hour that made it feel like a child’s first trip to Disneyland with fireworks exploding, the hug of Mickey and all the rest of the awe.

Trying to prevent my salty tears of joy from running all over his glowing face, I held his stare for what felt like a century and knew once again that no feeling could ever replace this – that THIS is all that mattered in life and what moments are made of. He continued to offer Momma his undying love, the left side of his cheek creeping up to crinkle his soft eyes, then quickly followed by the right. As his mouth widened and his eyes brightened, I melted into a million pieces and vowed to cherish every second with my amazing son.

Now, whenever the going gets tough (overtired = 3 hours of screaming), I visit this magical moment, relax my shoulders and hold him closer than ever before. Because I will spend the rest of my life doing what I can, just to see him smile.
Posted by Meg at Wednesday, October 28, 2009

"Brought tears to my eyes...Thanks for sharing that today. I need a Lawson fill soon!"

I love it, I know exactly how you felt at that moment. Great, great post! :)

That was one of the most beautiful things I've ever read. You're an awesome mom!!!!!