Four Strikes and Momma's Out? 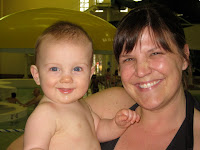 It was the kind of week that, pre-baby, I would’ve dreamed of – filled with friend, festivities, food and…wine spritzers (no F word is synonymous for the amount of adult beverages consumed over the weekend besides the four-letter one). Though still a remarkable four days filled with smiles, magical moments, touches of drama and watching one of my besties “bite the dust,” there were repercussions to be had. And no I’m not talking about a series of simple hangovers. I’m talking about Mr. L going on a nursing strike.

On Saturday, consumed with fluffing the train, ensuring the reception was set up as desired, getting to the chapel on the time and preparing the organist secured just hours before, it got a bit easier to ignore the pang in my heart that reminded me I had been away from my child for nearly four days, separated by only 30 miles, but those feeling like they may have well been thousands. Wiping tears from my eyes on day on my trek into Lawrence and focusing on how delightful it was that my dear friend had found a man who filled her heart with utmost joy, I pushed aside the sight of my tiny son snuggled deep into the corner of his crib, tush held high, as I silently bid him goodbye. Though this was only the second morning I had snuck out of the house without our usual myriad of morning activities, it was the fourth night I knew it was not my warm arms that were putting him to sleep that night.

As the sunrise turned into sunset on day four, the hours ticked away with the kind of memories that will last a lifetime…from watching a friend turn into the most glamorous of brides, to sharing laughs in the air conditioned car in between pictures, to dancing the night away with people that you’re thankful for every day. It truly was an event to remember, and Lord knows I have pictures to prove it. Side note: we here at Team Choate continue to wish Kate and Brad a lifetime of sitting on front porches, nestled in one another’s arms and dreaming of all the love they share and all that is to come!

As Sunday arrived and we woke way earlier than a normal day knowing our son was just a short drive away, we went to pick him up and celebrated that our little family was together again. Immediately bringing him to my chest, it became awkward as he stared, gave a menacing look, then pushed away. Trying again, my heart skipped a beat as he turned me down like a bad prom date. I knew he was hungry after going nearly 12 hours without milk, so I made one final attempt…only to receive the same cold shoulder (or should I say cold lip?) treatment. Broken hearted, I knelt and place him on the floor to play and prepared a bottle, cursing myself for all those times I whined about nursing. In this moment, I missed it more than anything – the closeness and quietness of it all, the way I was the only one that could provide that moment of love and care.

The day progressed and he continued to seem unlike himself, turning away left and righty like a recovered addict. Other behaviors were awkward too, leaving me to crumple in a ball and beat myself up for being “the Mom who wasn’t there.” Seeming mysterious, as I’ve traveled for my job more days than this, we plodded through our routine as my heart continued to break and formula was prepared.

Night fell and I had stacks of papers discussing self-weaning, nursing strikes and more. Emails had flitted out to my Mommy’s Group, Facebook posts had been sent and I was exhausted from trying to make Mike understand. Tired and restless, it was Monday before I knew it and he was back to school.

Phone calls, doctor visits and many opinions later, we returned home Monday evening with a strep virus – a red, swollen throat filled with yuckiness that had been causing the whole dramatic effect. A throat ulcer, to be exact. Fabulous. Yet the bonus being – he wasn’t rejecting Momma at all with a strike. His throat hurt, dangit!

In the words of my dear friend Jared, “ummm, Meg – projecting much?”

At nearly nine months and a bottle strike potentially right around the corner, perhaps next time I’ll be a bit prepared. Or with a slow weaning process just months away, maybe this was a gift to start preparing me to give up the one thing I thought I loathed, and turn it into the beautiful thing so many Moms before me have described.

Way to go to bat, baby – and thank you for not striking Mommy out. I hope to continue our game as long as we’re both in it to win it. Because, after all, as so many wise women have said before me – the game of childhood is over way before any parent is ready to retire.
Posted by Meg at Saturday, June 12, 2010