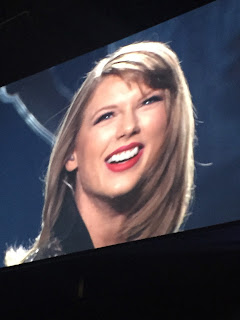 "Um, I'm starting to get concerned. Red lips, her perfume, fewer jewels and more sparkle, and the looping album?! I mean, you went to Walmart at approximately 7:07 a.m. the other day just to score 'Wonderstruck. Are you going to get an awkward cat next?!"

Since my husband had started his sentence with "red lips," I just went and ahead and broke into song as a response to his question. I also was curious as to how he knew so much about the pop diva as I did...

His concern's legit: I want to be her. Be her best friend. Have her as my daughter. Whatever it takes. Taylor Swift is the bomb diggity dawg.

Since losing our voices with lust last week at her concert, "1989" has been a constant in our house, the boys learning the words and moves as if they had been in all of her rehearsals. As I battle the commute each 8 or 5, I recall the concert fondly, noting it brought that feeling of being in high school all over again. The sparkly signs, sense of freedom and empowerment, adrenaline and fun. Guys who still had six-pack abs, lyrics that told of precious heartbreak that you feel so deeply but don't tear apart a family and late nights gabbing with girlfriends talking about nothing at all. It felt like being chauferred by my friend's super cool mom all over again, a mini van full of toilet paper and joy. Pure innocence, fun and bliss. It was one of the best concert's I've ever been to. 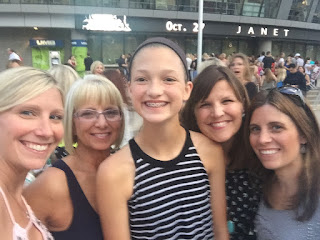 At one point I was surprised to be almost moved to tears, Taylor's words so genuine and heartfelt as she used them to inspire the crowd that was 99% 15 and under. She spoke of belonging, authenticity, love and all that seems to matter in the world in a gentle, human way. To see the look on these girls' faces was so moving. It was a nice break from all the headlines, posts and stories you hear that seem to be representative of young women today. Ok, the spell was a bit broken when the gal dressed as a cheerleader behind me shouted "SHE'S SO WISE!,"but I was glad to hear her using this for Taylor versus a Cyrus or something... 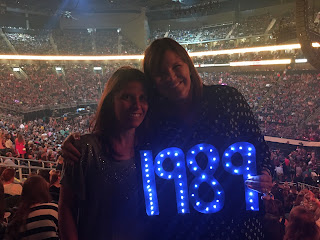 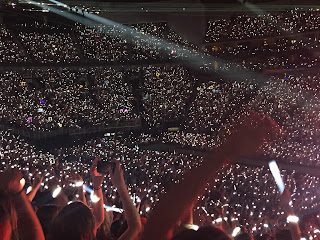 Awkwardly, I could go on for hours about all I adore, but let's just condense it into a short list, shall we:

1. Girls' gear: these females came out with a PLAN. Girls dressed as Taylor's cats, or perfectly crafted ensems to match her style, sporting her Keds, etc. Best of all were the littles in her souvenir tees with unique cuts and tied at the waist with shoes cuter than mine and pleather leggings.
2. Boomin' bracelets: attached to each chair was a clear bracelet that looked like a FitBit. Start up the music and find that multitudes of colors match the beat of the music the whole concert long, plus work with motion when you get home. Taylor said she likes to see everyone - even at the tippy top.
3. Flawless style: just the right of sparkle, black, white, heels -every.single.bit.of.it. I will never forget those "Shake It Off" pink sparkly heels. It was like Peaches and Cream Barbie got a current makeover and won and grammy.
4. Minimal sheek: the girl didn't have on a single accessory. All she needed was her badass self, some red lips and a killer outfit. To be that much with so little...awesome. But I guess if you look similar to a runway model you don't need to use accessories to cover all the wobbly bits like the rest of us.
5. Seeing stars: she literally spreads light. She was aglow with all of her sparkles and ignited the same in everyone else. Plus the sighs, oh the signs. So much fun!
6. All-inclusive stage: the thing rotated high, low, left, right and everything in between. Everyone had a good seat in the house
7. Chippendalesque dancers: gyrating, ab flaunting and straight up stage talent. Better than Vegas.
8. Real media: video vignettes played between sets illustrating how real TSwift and her friends can be. They asked her real-life, silly questions you always want to and she answered. Plus some killer B roll. Super fun.
9. Goofy faces: she has a series of facial expressions that would be nerdy but from her seems cool: the sexy chic, awkward 90-degree lean in and bait face. Classic.
10. Taking it in: even after all this success, she pauses to take it in and it seems legit. That doe-eyed-pause seems to truly be of appreciation and wonder, my friends.

A girl-powered, living' in the past while desiring the future is one I'll never forget. Thank you, Taylor: I'm a Swiftie for life!