And Then There Were 19 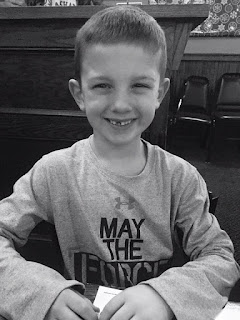 "Yeah, so L - if that tooth is still hanging out there, I'm going to come by Saturday and we'll do the string trick, ok?" my dear friend Katie offered, my son's eyes lighting up at the prospect of his front tooth actually leaving his mouth.

"Deal," he replied. And they shook on it.

Little did the two of them know them know the date would soon become unnecessary, the plot of the loose tooth creating it's own ending on a Wednesday at school.

On this same Wednesday, I met the crew at a nearby restaurant, an advantage to night showings while our house was on the market. I was immediately greeted by a black hole - one that hadn't existed that same morning - and shrieked in delighted while at the same time my heart did a little dip.

You see, it's not just the first tooth. It's not just treasure boxes and fairies and money under pillows. It's so much more.

It's a kiddish grin that looks a bit more grown. A temporary lisp that somehow made him sound even more mature. A space that was once still full with just a bit of early childhood that is core to so many memories.

One down and nineteen to go. But he better still be partially a mama's boy when the actual nineteen hits, or that hole will belong to this mama's heart...

Congrats buddy. May that fairy start you a killer allowance you've been dreaming of. And don't worry - Aunt Katie will be on speed dial for the next one.
Posted by Meg at Monday, January 11, 2016