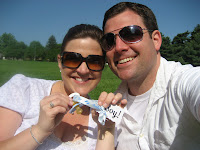 That’s what our little BOY will be made of! Mike and I are thrilled to announce we will welcome a son into this crazy, dream-filled world around September 25. The marking of “gender day” as we so fondly called it months in advance kicked off what turned out to be one of the most incredible 9 days of our lives. The summary goes a little something like this:

May 10
As midnight neared, we drew the shades close to inspire a little shut-eye, both harboring doubts that much sleep would be captured among the electricity built by excitement of what the morning was to bring. As Mike dozed off, I stared into the darkness, dreaming of blue quilts vs. pink blankets and practiced my reaction to the news of a baby boy or girl. As I pondered what my gut reaction would be, I could not differentiate the butterflies – regardless, I was going to be excited for whatever lay ahead for us. As the drone of our clocks ticked on, the red digits faded into the night and I dreamed of all things baby in anticipation of our 8:15 (thank God) appointment.

May 11 – Gender Reveal!
Waking as if I had already consumed six cups of coffee (or what I imagine – I don’t even drink the stuff), I jolted out of bed with the ferocity of lioness on the prowl. Even Mike, the man of 5 a.m. wasn’t yet quite coherent, though when he realized the enormity of what the next hours held he came to in a hurry. After a quick shower and a carefully planned outfit (avoid dresses on sonogram days), we shared a hushed breakfast filled with secret glances, warm smirks and soft touches meant to signify “this is it!” After a quick stop to grab a Coke (prep to make sure the baby was going to reveal itself during the scan) we were on our way, our plan for the day carefully tucked in the backs of our minds. Arriving nearly 40 minutes early, we stared into the darkness of the office, knowing the answer to what we had been yearning for was literally behind the closed doors. Pacing and trying to look nonchalant, we took a brief tour of the hospital’s jagged hallways, running into smiling faces and those that looked anxious about their schedule procedures.

Finally, the lights came on, flooding the naked walls and highlighting the painful furniture that seems to be a part of almost any medical waiting room. Rushing in, we placed our names and were greeted within five minutes, our manila envelope with one blue, one pink pacifier tucked securely under my arm.

“Megan? Come on back…” the unfamiliar nurse said – three of the sweetest words an expectant mother can hear.

Mike pranced behind me in excitement, both of us exchanging glances that made it evident we could barely contain ourselves. Practically ignoring the important, clinical questions the nurse was asking, we pushed ahead to explain what we hoped they’d participate in as part of our gender reveal. “If you wouldn’t mind – we’d like the doctor to not share what the gender is during the scan, then place the blue or pink pacifier into this envelope so we may open it in private later today,” I said. Smiling quizzically, she said that yes, she’d explain it and disappeared out of the room. Claiming that we were complicated, the doc arrived in a hurry, shared an introduction and began immediately on the sonogram. As Mike’s eyes filled with tears, I went on to ask ridiculous questions, asking if that was an arm or an eye, etc. After sharing some eye-to-eye contact with the little one and watching its heart beat at just the right pace, we stepped into the hall waiting for the glorious envelope hand-off as if it were the Olympic torch. 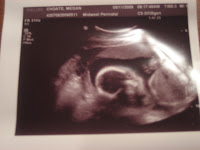 Anxiously driving to our next location, we pretended to eat our breakfast slowly, having left the manila envelope in the car to avoid any strike at temptation. Halfway through waffles, we modified the plan to include moving immediately to Loose Park, where the unveiling of the gender would occur. Driving 10 miles over the speed limit, we parked among the quiet of the morning, knowing this was perfect as most were at work and not relishing in this special day. With the sun shining bright, we carefully scanned the horizon to find the perfect tree, where we could capture the moment of truth and begin making excited phone calls to all we loved.

It’s branches sprite and blooming, we laid out the trusty trunk blanket and plopped ourselves down in the damp grass. Mike, still standing, grasped the envelope and with a twinkle of an evil eye said, “Ready???”

And suddenly, there we were, swapping hugs, kisses and tears as we gasped at the blue pacifier that had emerged from the confines of the envelope. Our hearts had not changed – we were thrilled with all that was to come and the enormity of what raising a son would mean for both of us. Sharing tales of sports that could be played, Jayhawk gear that could be worn, and shades of blue meant for the nursery, we hastily grabbed our cells and let the good news spread: it’s a boy!
Posted by Meg at Wednesday, May 20, 2009

Woohoo! A boy. Congrats! I can't wait to meet the little guy in a few months. By they way, September is an awesome time to be born. Although there is some confusion come birthday party time... do I invite my new friends from this school year or stick with last years classmates? Ah, life's little challenges (when you're between the ages of 4 and 14). Love you guys!