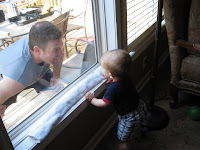 A light breeze trickles in through the cracked window, just an inch from its frame so as not to tussle the hair too much of our resting son in the back. The air is crisply lined with the scent of fall, the memories of the day laden in our minds and the threads of our clothes. Soon, there are tears to match the falling leaves that had been such a significant part of our family’s day…slow and wandering, meaningful and beautiful. Tears of joy. Tears of disbelief. Tears of wonder. Each making its way down one by one as I hold his little hand, his eyes growing heavier as 7:30 drew nearer, his body for once calm from fatigue as we shared several magical minutes. His skin feels just as soft as the day we brought him home, the only difference that more dirt lines his nail beds, his chubby feet hang a bit lower in the car and his hair a bit longer on his collar. Other than that…just the same. The little baby I fell in love with at the first signs of understanding of his being. The little baby who will always remain that way, as with so many in a Mother’s heart.

My husband enters the car, his strut still joyful even as the evening grows longer and the event of running in to grab cat food was his recent mission, a less than thrilling task. Taking in his profile, I marvel at my first love, the contours of his face just as handsome as the ones I had picked out in a picture and labeled as “the one” before fate ever crossed our paths. The man who stands by through celebrations, contemplations and disappointments that real life throws my way. The man who takes me at face value, through additional pounds, tantrums, quirks, undomestic habits, long hours, stubborn charades and of course, all the good stuff too. And I marvel…

How did I ever, ever, in a million years get so lucky in love?

I think I’ll quit asking and just keeping taking it in, bit by bit, ounce by ounce as the little droplets of magic that have become my life to create a pool of savored gratitude that, for some reason, is all mine.

Because, after all, life doesn’t get much better than being lucky in love. Agreed?
Posted by Meg at Sunday, October 17, 2010