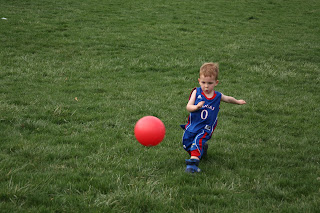 “Honey, I know you’re disappointed, but Mama didn’t get to the laundry after MIDNIGHT last night,” I explained to my two-and-a-half year old as he burst into tears at the announcement that his go-to uniform was unavailable. I had kinda been hoping I could go into more detail about how it was the fourth night in a row I’d worked past 11:00 p.m., that he’s worn the damn Jayhawk jersey and matching shorts for gah knows how many days of 70-degree weather that the thing was practically standing up in the corner of the room on its own and that sympathy and understanding would be his response…

But yah, not so much.

You see, these days there’s not much that matters outside of the fact if the Jayhawk jersey and shorts are available for wear. Forget the elections, the turmoil of Afghanistan or the fact that people are losing their jobs. This little dude wants to know the status on the KU gear!

Given as a gift to inspire to inspire Jayhawk love from Nana, one would have never suspected that this little two-piece, size 3T ensem would quickly become the reason for our own full on war, peace negotiations and treaty talks in our own home. And the larger party, aka Mom and Dad? Not winning.

To boot, it’s imperative that “strong socks” accompany the jersey and shorts, along with his trusty pair of “snow boots,” because, as any good alumni should know, this is what the Jayhawks wear. 24/7. In all weather. Trust me, to convince him of anything different makes for a three-day charade of win-him-back-so-he’ll-at-least-sleep-or-eat shenanigans.

So sleeveless, in shorts, with hiked up socks and snow boots it is. Because this battle? So not worth the fight.

I hear Baby GAP went out at the mall anyway.