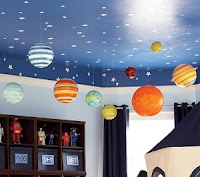 “Isn’t it awesome buddy?! An entire solar system just for you!” I said gleefully, just waiting for the charm and excitement to catch on.

And caught on it did as he paced with anticipation at the bottom of the three-foot ladder, asking question on top of question as we tried desperately to remember which planet was what with the intent to provide a bit of education on top of décor.

Throughout the day we would visit it, watching as the planets dangled lightly at the end of their strings, perfectly accenting his bedding, chair, rug and more and included one of his favorite things: the moon. So imagine the surprise when I heard this:

“Ehhh – ahhhhh – uuummmmm – Mommy? Daddy? Anybody out there?”

Tiptoeing my way near his doorway and avoiding all the crickety cracks of our aging floors, I listened quietly nearby, thinking he was a bit anxious about me turning around for another business trip. But instead I hear a bit of stress, angst and mumbling echoing through the small crack beneath the doorway.

Deciding to go in and check out what was up with this abnormal behavior, I see he’s relieved to see me and he instantly shared:

“THE ORNAMENTS WERE DRIPPING ON ME!!!”

It was scaring the crap out of him.

The hubs immediately removed and dug through the trash to find the box and millions of plastic bags for each planet as I attempted to calm our sock, rocking him gently as he spent the next 48 minutes obsessing over the fact that Mars, Jupiter and likely that damn Pluto were trying to attack him in the night. Finally, his eyes began to fade, his lovey tucked by his side, but not before he whispered:

“Promise Mommy will take it back to the store…not here?”