The Dog Days Are Over 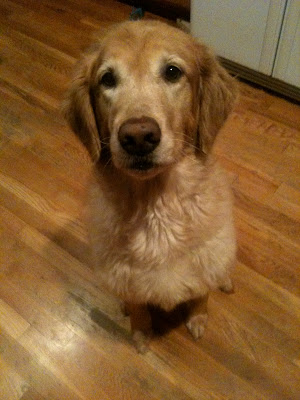 “Come on girl – what’s your deal?! We’re just getting started!” I chided to our six-year old Golden Retriever as she started our 3.5 mile run several lengths behind. The air hung thick in the atmosphere of the morning, my skin balancing the throes of goose bumps and cold sweat. Focused more on the world around me given the early hour, lack of joggers and park patrol cars nearby, I concentrated on how quickly I could knock out the day’s run in anticipation of crossing yet another training day off my list. A few rounds of Usher and two miles in I feel an incessant tug on Ellie’s leash and my heart is stricken with fear, thinking some serial killer was using this move to nab me from the streets of Shawnee Mission Park. Instead, I find my once youthful pup laid behind me, panting awkwardly and looking desperately as if she wanted to push on, but just couldn’t.

Stopping completely I shut down my GPS as it taunted me for having only completed two miles. I quickly calculated how far I had pushed the pup yesterday, assessed the clouds and temperature, then curiously looked back at her to see where the trouble may be. Doing a once over on her hindquarters, front legs and assessing her paws, I found nothing wrong. Coaxing her to the shade nearby, she laid for 10 minutes as I stroked her blonde fur and felt her pulse, reviewed her pupils and counted her breaths. Twenty minutes pass and I attempt to get her up and she just won’t go. This coming from the dog I have to beg to calm down on a daily basis.

One call to the vet later and securing my Mom as backup (big mistake as she was frantic I was running alone in the park), they convince me to give her some time then try to get her back to the car. I watched in fear and panic as she made it to her wobbly pairs of legs, her determination leaking from her unconditionally loving heart. Like the movies, flashbacks of the day we brought her home, yelping on my lap to the times we found her tucked beneath the coffee table, the endless Frisbee games at the park and the winter nights packed near a fire blazed before my eyelids as I had my first dose of reality her limitations and the fact we may lose her someday. The trek took nearly 75 minutes, one foot after the other, one paw after the next, her losing her footing and stumbling with every step as if performing the worm dance. I closed my tear-filled eyes and encouraged her with soft whispers, breaking every 10 minutes only to begin again.

Finally, we arrive at the car and I look to find no one in site. Positioning myself like a bench press, I pile her in the car and watch her carefully through the day, the guilt weighing heavily on my heart as I consider it was my training that had done this to her. Suddenly, a half marathon seemed like the worst bucket list item ever for the sacrifices it had meant so far, this one being the most significant.

Days later she recovers nicely, the results of her episode unknown and not well understood, but likely minor and just inconvenient vs. episodic. From this experience I retired her from my half-training runs as the mileage increases week after week and the fear in my spine reminded me it could be more series next time, certainly understanding to respect the body’s needs. Also retired? The negative way I speak to her when she’s underfoot 24/7. The lack of acknowledgement I provide her when I walk in after a long day’s work, she of all beings in our home the most delighted to see me. The way I get on her when really I’m mad about something else. Kicking her out of rooms just because I need a minute alone. Cursing her as I trip over her near the bedside. Because this was a wake up call.

The dog days are over. And she likely won’t have too many left.

So by golly, I’m going to enjoy them. Embrace that I’m her person. Celebrate that she lets my two-year-old play tackle football with her and chases tennis balls in the yard. That she literally wouldn’t hurt a fly. That everyone thinks she’s abnormally beautiful That she guards our house with the dedication of a soldier. And for cleaning up the crumbs just so I don’t have to. And for that big, consistent sh*t eating grin she provides me no matter what.

Because really, where else can you get that stuff?

So despite her running dog days are over, her others are just beginning again.