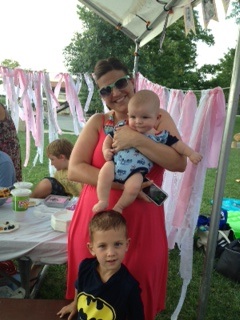 1. Last week I sported poo on my dress for half a day before I received the red alert from a colleague. POOP. On a dress. All day. In a professional environment. Like a straight up yellow stain front and center. At least it nearly matched the stripe on my dress. Who knew I'd be wishing it was actually breastmilk on my clothes?

2. Little Dude has a new "talent" called selective listening. At first he was given the benefit of the doubt as I lay awake at night pondering the use of his ol' eardrums and when I'd call the doc, then I noticed it was only Mommy directed. "WHAT?!" To every.single.sentence. Sometimes with a smirk. Between the corner of annoying and frustrating, I'm having a hard time finding Love and Logic street. Now I have two of them in the house with this "gift?" And one on the way? Awesome. Again, why one has girlfriends.

3. A colleague of mine and I have reached a new level of intimacy in our relationship bound by understanding, motherhood, humility and now, maybe some humor. The girl rescued me while I had a mini meltdown over a broken pump. It wasn't the hospital trips, ambulance coming to our house that week and all of us having the flu that sent me over the edge, but the pump. The point in which she intervened may have involved me only in a hands-free bra, Spanx and tears. She deserves a promotion.

4. There is absolutely nothing better than a wee one that chooses to snuggle in right under your chin, heart to heart, and stay awhile. Can't we keep them like that forever?!

5. I'm convinced children under the age of 15 are not competent in nose blowing. There should be some kind of class.

6. On my Christmas list already this year: more than two or three hours of consecutive sleep. Not complaining, just stating. I'm talking to you, Santa.

7. Crappy Pictures is speaking my language. Add them to your read list now.

8. There are certain things I get all looney bin on with the second child. This week: when to give him solids and if I'm going to freshly prepare those said solids or not. Why do I create these issues and obsess? The child is not going to ask me if he was exclusively breastfed until six months or not, gah.

9. When I see other mothers in public balancing one or more children and doing and saying all those things I do, I want to hug them. Smile at them. Help them. Applaud them. Then I get to a restaurant where I'm actually by myself, with girlfriends or my husband and I want to run from them. I find this very confusing.

10. My 4 month old stretches from my shoulder to hip with no problem these days and my oldest turns four in two weeks. No one asked me permission for any of this. Harrumph.