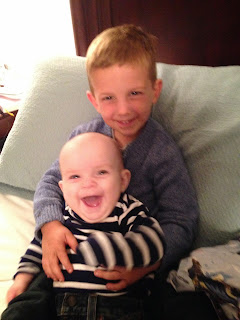 After an eight hour car ride one way with two children under age five followed by a week of illness, I clearly no longer know what day of the week it is. Please accept these momfessions anyway:

1. On these frigid mornings when I leave my car warming out front while I assemble the posse, the thing I think about most getting stolen out there is my breastmilk. Not the new Highlander, but the breastmilk. Liquid gold people. Irreplaceable and uninsured.

2. After six costume changes thanks to illness that has struck our home, I went ahead and just wore a sweatshirt with no makeup to a holiday party. This gal o' glitter waved the white flag and gave friends the best version I had, including a kid with a big ol' chocolate stain in the middle of his sweater. Hey, at least I quickly showered.  None of my accessories contained bodily fluids. And I wore deoderant. I mean, it was Old Spice, but who has time to go to Target anyway?

3. At a particularly low point on our car journey over Thanksgiving, Squeak ended up on the floor of a restroom at a truck stop. A not well marked TRUCK STOP. At least I put him on his changing pad?! You know, the one he immediately scraped up so he could explore the "unique" floor around him. Augh.

4.  It crossed my mind to snatch the baby from his cars eat and just go ahead and nurse in the passenger seat while we trekked through the countryside at 75 mph. This idea was quickly squelched when visions of Grey's Anatomy, ER and too many Nicholas Sparks movies started to play through my head. Not to mention the 10 cops we saw just on the way up to the Land of 10k Lakes. Damn you families of the 50s who had it easier.

5. Visiting a family of 20+ makes for that break you never get at home. Best.babysitting.service.ever.

6. Allergic reactions in children may be one of the scariest things a parent can experience. It NEVER gets more comfortable. Props to the parents who have kiddos with significant diagnoses in these areas - it's a tough gig.

7. Pre-schoolers on steroids (for medical reasons) are slightly terrifying. Think the Hulk during his tantrum state and you have the scene of our Thanksgiving holiday with Little Dude.

9. Studying parenting must commence in our home. They are starting to out smart us. Example: "There is no way you are ever, never going to take this splinter out Momma. After threatening and explain infection in an uber dramatic way he responds with "Ok, well Ill just do everything with my right hand then." Alright then. Can't argue with that.

10. Don't turn me in, but most days I'm uncertain as to what a seven month old should be eating. Oh, and I totally mean to make my own baby food. Meantime, I want to thank Gerber, Ella's Kitchen and Happy Bellies in keeping us all upright.

How was your turkey day, Momma?