Top 10 Things the Little Man is Doing These Days 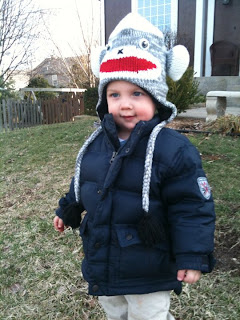 1. Shouting “Almost! Points!” and Slam Dunk!” when shooting hoops in the house
2. Counting to 10 and repeating his ABCs – with enthusiasm
3. Independently playing in tight little corners of the house with trucks, puzzles or intensely flipping through a book (he can “read” ‘Thomas, Peek a Who’ and ‘Baby Faces.’)
4. Passing on blessings when we sneeze: “ Bless you, Mama;” “Bless you, Daddy.”
5. Growing confidence in the water with blowing bubbles, kicking, doing “super baby” and the frog song while ducking his head under the surface
6. Announcing “MOVE PLEASE” to anyone that may be perched on his couch or in Daddy’s chair so he can take over, settle in and enjoy his snacks
7. Playing chase with anyone who wants to burn a few calories, all the while kicking his legs and whispering “shhh” as we creep around the corner
8. Running, running, running and wrestling, wrestling, wrestling…accompanied by screeching giggles
9. Bouncing on beds, couches, dogs, laps and really, any flat…or not so flat…surfaces
10. Obsessing over Yo Gabba Gabba dances and songs and re-enacting the likes of Mya, Elijah, the Roots and Jack Black
Truth be told, there aren’t just 10. Instead, there are a handful of tantrums, diaper changes, moments of defiance and bzillions of precious moments scattered in between. And we wouldn’t change any of them for anything…
Posted by Meg at Monday, March 07, 2011