“I don’t know babe, he’s at that age where he may not be so sure…not to mention the Easter Bunny tends to lean a bit on the creepy side, don’t you think?” Mike said as we packed the car, inevitably still fighting the trek to the mall. Though I secretly agreed (those big beady eyes!), I continued to load all the items it takes to convince a 19-month old to wander through a shopping center, complete with snacks, drinks, distracting toys, a lovey and of course, a stroller. Because the combo of TOMS and a brisk stroll carrying 24 pounds plus a 10-pound purse just wasn’t going to cut it…

We made our way from one end to the next, asking sets of apathetic, joking employees that stood outside of their storefronts looking bored exactly where the dude (dudette? Always thought the Easter Bunny was male?) was located. Finally, we spotted him down the way tucked outside of Macy’s, his figure as still as if he really didn’t exist at all. A gently lady with kind eyes guided our way down a small lane lined with a white picket fence and all the Easter necessities: gaggles of chicks, bright, colorful pastels, large painted eggs and more faux grass than the eye could see. We had been talking about the EB for days and the little man had even mastered his name and the concept of his purpose this upcoming weekend. Which, given the story we shared of him sneaking in while he was sleeping and leaving tracks suddenly seemed to be not so comforting…even if the creature did leave presents. Which likely led to the babe’s reaction: 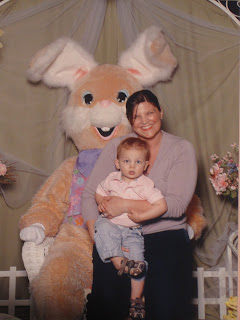 And this was a good shot.

Note: I was never meant to be in this picture, but the velcro attached to my sides convinced me otherwise. At least I was sporting my new lip color...now if only I had a similar token to offer the bunny for having a plus-size gal perch on his knee...

Needless to say, his reaction was similar to that of a mouse running from a snake. But there were no tears…so that’s a bonus. And we can always try again next year.

Meanwhile, we are keeping some other traditions alive and introducing new ones such as the Easter tree: 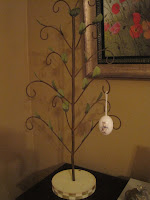 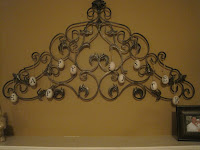 Putting out our baskets: 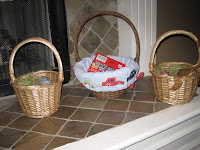 And placing an egg holder as our table’s centerpiece: 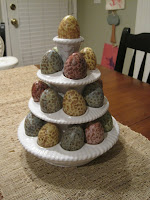 Most of all, we look forward to a meaningful time with family and friends over the weekend, complete with an egg hunt and all.

So yah, should be a good Easter. Wishing you and yours the same!
Posted by Meg at Monday, April 18, 2011