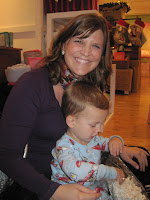 “I know it’s super last minute – hope you can join us!” I typed madly across the screen, inviting the small MOMS group I throw together to this month’s event. Having just received my 10-millionth email of the day, this time from a local shopping center, I happened to pop it open in a work avoidance effort and discover that Pottery Barn Kids was hosting story time the coming Saturday. Daydreaming of darling kiddos in their PJs, each hugging teddy bears and listening intently to the teller, I decided to go ahead, even with just five days notice to a group of extremely busy women.

And surprisingly, we had a pretty good turnout: 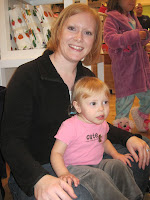 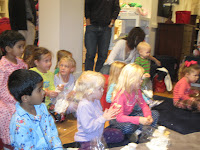 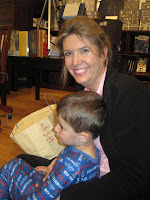 Arriving early to the store, we were greeted from the friendly staff members who sat patiently by while our children rode their expensive display bikes, messed with the wooden trains and found comfort in their perfectly made beds. Soon, we were invited to the back and asked to form a circle on one of their classic rugs near a set of bunk beds, a rolling cart of hot chocolate, popcorn and cookies nearby. As the kids eagerly gathered their treats and found just the right spots, the store employee, clad in a robe, slippers and teacher voice began, featuring three memorable books from the store’s collection. 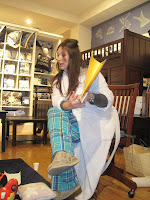 As the storyteller rattled on in her sing song voice, most of our kiddos sat patiently, enjoying popped corn for the first time, taking in the rhymes of the story and engaging in the games they played in between. Sure there was a bit of taking a break to explore and even some asking of “can we buy something from here when we’re done?” mid-way, but hey – that’s why they host these types of events, right?!

Three books were read (and went immediately on my Amazon list), a fashion show was had (so pumped the little dude agreed to sport his new Uggs), snacks were consumed, games played and book club cards signed. Even a little hot chocolate was spilled on that rug and very little fretting was done about it. 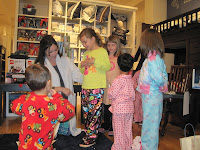 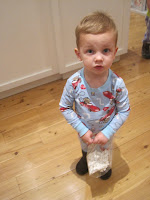 The outcome?: funny comments that can only come from young children’s mouths, glowing eyes as they took in every word, hilarious questions and even more comical actions as they attempted to play games. Plus, a set of chill parents who had found a little free treasure on a Saturday night.

So all in all, a fabulous event-I highly recommend it. Check out the other story times available at a Pottery Barn Kids near you and enjoy!