'Twas the Day Before Pre-School 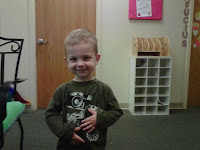 For our little household, tomorrow is a big, big day. And Thursday? Even bigger.

We'll say good-bye to our daycare providers of two years, those that have helped shape, mold and grow our amazing little boy to be the magical creature he is today. Those that held my hand when I left him at just three months old, picture messaged me daily on every business trip,called with every little detail true to my helicopter Mom style, diapered, adored and loved him as if he was their very own. There are no words to show our gratitude for these amazing women who we now call family, so instead we'll leave them with some Vera Bradley, Emi-Jay ties, gift cards and this little ditty:

‘Twas the Day Before Pre-School
'Twas Lawson’s last day, when all through the center,
Not an eye was dry, not even his mentors’;
The coats and hats were hung on the hooks with care,
In hopes that his name tag would remain there;
The children were nestled all snug in their beds,
While visions of recess danced in their heads;
And Chrissy in her sweater, and Lawson in his GAP,
Had just settled down for their afternoon nap,
When out in the classroom there arose such a clatter,
They sprang from the cot to see what was the matter.
Away to the circle they flew like a flash,
Tore open the books and on snacks they did nash.
The crafts on the ceiling and the art in a row,
Gave the lustre of kid magic to objects below,
When, what to my wondering eyes should appear,
But a team of amazing teachers he loves so dear,
With sassy young leaders, so lively and dandy,
I knew in a moment it must be Miss Shannon and Mandy,
More rapid than eagles his caregivers they came,
And he whistled, and shouted, and called them by name;
“Now, Chrissy! now, Goesha! now, Brooke and Brittney!
On, Ebony! on Lisa! on, Stephanie and Mariah!
To the top of the slide! to the bottom of the wall!
Now hug away! hug away! hug away all!"
So around the daycare, the teachers they flew,
With hearts full of joy, patience and graciousness too.
And then, in a twinkling, I saw in my son’s eyes,
The difference each teacher had made, which was no surprise.
As I drew in my head, and was turning around,
Down the hallway his friends came with a bound.
They were dressed in kid gear from head to toe,
And their clothes were all tarnished with something-only-a-toddler-would know;
A bundle of toys they flung front and back,
Looking as happy as ever in their little pack.
Lawson’s eyes -- how they twinkled! his dimples how merry!
His cheeks were like roses, his nose like a cherry!
His droll little mouth was drawn up in a grin,
All because his awesome teachers, his heart they did win;
He had a charming face and a little flat belly,
That shook, when he laughed like a bowlful of jelly.
He was bright and creative, a right jolly old kid,
And I grew overwhelmed with love, no matter what he did.
A wink of his eye and a twist of his head,
Soon gave me to know I had nothing to dread;
He spoke a few words, then went straight to pre-school,
Where he found his new friends and activities to be cool,
And though leaving Canterbury daycare hurt from fingers to toes,
He gave a nod to his classroom and rose;
He hugged Miss Chrissy, to his friends gave a smile
And away he transitioned to pre-school, down the road not a mile
But I heard him exclaim, ere he tottered out of sight,
"What a difference you’ve made – thanks for being my light. I adore you with a full heart and all my might!"

I don't who's going to have it worse these next few days: me or him. All I know is that 'tis two days before pre-school...
Posted by Meg at Tuesday, November 29, 2011

Oh Megan! You're killin' me. I am tearing up just reliving the key times when we say goodbye to one milestone and try hard to welcome another to our child's world. Funny how knowing you're doing the right thing doesn't help you get through the unknown. Your job is to allow yourself some tears and know that all of the pieces of your heart that Lawson has will remain safe in his care.