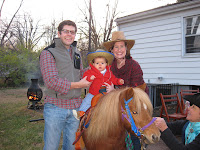 “Are YOU going to ride a PONY?!” we chimed with the voice most often used for preparing our toddler for the event that lay ahead for him. In this case, we’d been chatting for nearly a week about the happenings of baby Walker’s first birthday party, complete with a western theme, beloved friends, darling décor, gobs of delicious food and of course…a pony.

And so we went in with open minds that this pony ride might actually happen, because really, how cool is that? It’s not everyday your little one gets to saddle up in Johnson County. Note: entirely much more possible in the parts where we live. Remember my plot to steal one of those smaller-than-Ellie sized miniature ponies?! So what had started as a quasi-joke from two of our best friends had now become something we’d been anticipating for days…

As the chances of this occurring became more and more scarce (we had to wake him from a nap, his molars were coming in, there was a large crowd of peeps and the wind and cool air had picked up), we watched as the even littler ones grins grew from ear to ear, not knowing completely what was happening, but delighting in the soft mane in their fingertips and odd movement that had now become part of their stance. Party-goers chased the wee ones down with flip and digital cameras, having so much fun one would think they were trotting on the pony themselves. Toys were played with, delicious tea drank, pictures taken of the centerpiece highlighting Walker’s first year and then, just as the nice pony-handler was opting to go…

He went for it:

Round and round he went, squeals of delight escaping from his mouth, followed quickly by the word “Whoa!” and a lopsided sit that required two parental hands on hips. A natural (where do they learn this stuff?), he held tightly to the saddle, letting his skinny little legs bounce against the pony’s sides, sharing grins with the owner as our cheeks began to chap and our hands grew numb. Picture after picture was shot, each of us taking turns to experience the magic that seemed to be emanating from our two-year old in this first-time experience, giggling as he expressed his desire to continue more than the allotted 20 times we’d already journeyed upon. As the sun completely set, we prepared him to say good-bye to his new friends, which was signified with a farewell carrot from a tot’s hand to a soft, furry muzzle. Besides the whole him not choosing to wear his cowboy hat and both his parents being too out of shape to really do that many laps around the yard, it was completely awesome.

The rest of the night was too as we delighted in celebrating a very special boy, whose first year was marked with giggles, muscle flexes, high hands, polar bears, kisses and beyond adorable monogrammed ensems. As his two amazing parents stood by, surrounded with so much love, we indulged in delicious BBQ, watched as he graciously went after his smash cake, laughed as he hung out with his gifts and cherished him as we did everyday from the minute we knew of him. 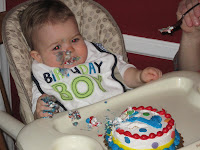 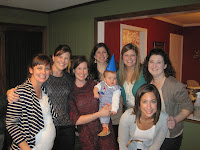 Walker – you are a remarkable young man and we love you immeasurably. And those crazy parents of yours. Thank you for being such a light in our life.

And for having a pony. In Prairie Village.