We Used to Be Quasi-Cool... 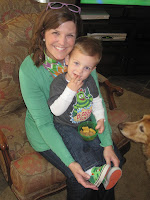 Then we found ourselves at the Yo Gabba Gabba concert on Sunday evening.

But the great thing? A load of parents who also looked as if they wore the “cool” label decades back were also in tow, mouthing the lyrics to the insanity that is the Disney show, shaking their hips appropriately and delighting in the wonder that lined their children’s faces.

And in this crowd included us, a pair of happy-go-lucky-I-can’t-believe-we-just-dropped-cash-on-this-show-plus-an-extra-60-for-the-tee-and-“flashlight”-thingy. But the truth?

We totally loved it.

Maybe even more than this guy, though he did admit, as you’ll see here he was ready to party (note I don't know how to rotate videos and they take two hours to download!):

Who could have totally left once the light spinning thing-a-ma-bob was placed in his little hand. Well, that is on the second round: the cheaper one that looked just like a glow stick? Not cutting it. Already at age two, he recognized what the other kids had and desired the same. Ay yay aye. But we were happy to purchase it for him, particularly since it kept him patiently seated while waiting for the show to begin. Oh and the tee and plush sets you ask? Yah, we may have gotten a bit caught up in all the excitement…

So much so that Mommy may have gone bananas and stood on her seat and shook her tush as if she were in Zumba class when Michael Jackson came on. Both boys look totally ashamed. And when she threw her hands up in “OPP style” to the hip-hop tune “I Like Bugs?” Grounds for pure red in the face, but also a few sneaky grins from the wee one, who looked a bit alarmed his Momma even know of such things. But who could help themselves??? I mean, seriously – at the core, it was a rap concert:

Ok, and there was a bit of this:

But overall a complete blast.

And in the eyes of our two-year-old, made us totally cool. Even if the word “cool” doesn’t lend us much street cred anymore these days.