Taking It In Stride 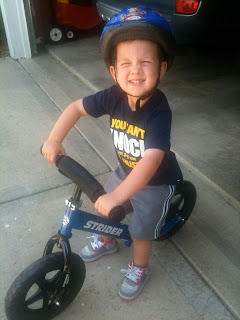 “This is by far one of the best $100 we spent,” I said wistfully to my Dad as we both glanced ahead at the growing boy finding his way down the path with confidence and ease.

“I’ll say so,” he said, jogging toward the pre-schooler, making him laugh as he chased his Papa, his tires kicking up dirt that lay haphazardly among the trees and grass.

In the week we’ve owned it, the “first big boy bike” has provided hours of entertainment, a feeling of boyhood at its finest, significant cuts, scrapes and bruises and of course, the opportunity to don his favorite accessory since early in life: the helmet. As he goes to sleep tucked loosely in my arms at night, he talks of his adventures with “mini-bike” and what it’s meant in his day. When he’s away from it, he hypothesizes when he can ride it next and where, as if he’s plotting a pleasurable trip to France in the near future. Riding in the car, he frequently checks in to ensure it’s in the trunk, just in case the opportunity to hit pavement arises on our trip to the grocery store.

In other words: the boy’s in love.

After some research from peers and the world wide web, we landed on purchasing the Strider, designed for kiddos as early as they can walk until about age five. Designed without pedals and various ways to twist it this way and that, it teaches them balance and coordination without the clumsiness of training wheels, so that when they’re ready to pop up on a larger bike, they’re ready to roll. For the extra 50 bucks or so it took to take it home from the Lighting McQueen 12” bike…it’s been worth every penny to see the joy and physical exertion it’s meant for our little one.

Having mostly mastered potty training and a fall birthday fast approaching, we’d been talking of purchasing it for some time. Now as the days grow longer and the sun hangs higher in the sky, we decided to bring it home early to break the monotony of sprinklers and endless hours of hoops for our very active two-year old. The day we purchased it was nearly perfect: weather so gorgeous you just had to roll the windows down, having spent the morning with our best friends from Boston and now a whole afternoon just the two of us to do whatever we wanted.

And so we made the trip to Trek in Shawnee, where they were sold out, then found ourselves at Family Bicycles in Brookside where each little Strider stood like a beacon in the window, eight different colors all ready to ride. Slightly nervous he was going to go for pink, which is more of a short-term, let’s try a ball instead of a bicycle decision for now, he laid his eyes on the blue and never looked back. One quick seat adjustment later, a swipe of the card and we were off, literally rolling out the door as I made bold promises we’d go directly to the park to try the new contraption. 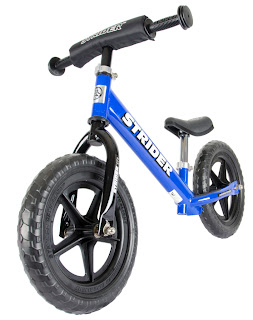 Ninety minutes and three miles later we were calling for backup, his cheeks so pink from the endless smiles and little leg strides over and over again. There are no words to explain the pure joy that was his that afternoon and many of them after from the wind rustling his hair, the trial and error of stopping and starting, the learning to share the path with joggers and other terrain vehicles, the steering, veering and necessary water breaks that made for a bike ride adventure that marveled Curious George’s. 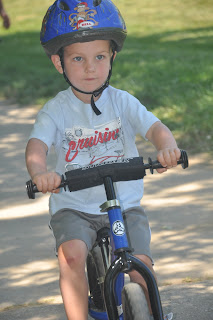 Now we find time most days to take this all in, the magic that comes from dispensing physical energy and finding something you love so much it requires daydreams and sometimes, even hurts.

In other words, we’re taking it all in stride. With the Strider.

And loving every minute…

Can Lawson make Reid like his Strider bike this much?

What will they bring out next! What a genius idea. Training wheels are so silly and cause more accidents in my opinion.