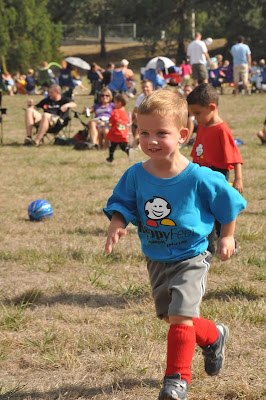 “Alright buddy, today’s the day…you’re gonna get out there, right?!” I asked with a mix of confidence, questioning and force as we made our way to week five of soccer.

One violent headshake “no” from the back seat from an adorable three-year old, a too-large shirt hanging from his shoulders and bright red shin guards confirmed: that sh*t was just not going down.

Thoroughly confused but never forceful so as not to mess with the delicate character building of a preschooler, I thought back to the weekly emails from his school sports coaches, who consistently rated him at 9s and 10s and pulled us aside for his “uncanny athletic ability” at just two years old. There were also the incredulous number of times other Dads stopped me to ask how old he was and just how he learned to already gain so much coordination and form to score point after point with a basketball. There were the two soccer coaches who took our name and number after seeing him playing with us on a nearby field for recreation, asking us to “give them a call when he’s five.” And who could forget the countless hours we spend day after day, night after night, toys kicked aside and forgotten to toss footballs, exchange soccer kicks and run bases well until the streetlights came on.  All in fun and not chocked full with any expectations, but contradicting nonetheless. In other words: his revolt to soccer made no sense to me at all.

Don’t get me wrong…it’s cool I drag my leg behind me like a wooden extension as 30 pounds is attached to me, acting as if his very soul is being ripped from his body as we “show respect for his coach and at least warm up.” We spend the rest of the hour gathered in our Jayhawk lawn chair on the sidelines, him watching intently as the goofiness that is pee wee soccer plays out in front of us. He stares at his ball longingly behind us as if it’s a loaf of bread and he’s not eaten in weeks. Yet we press on, watching small children chase each others’ heels, throw grass, stare at the sky and even score goals once in awhile. It does make for excellent Sunday entertainment and gets us out in the gorgeous fall weather late afternoon. Then we leave with a complete meltdown that he didn’t get out there with just his ball to kick it quickly and efficiently into the goal…you know, without any teammates around to mess with his flow.

So maybe he won’t be a team sports kind of guy. And his submissive nature, carefulness and thoughtfulness I rank high on the list of things I love about him. But this does pose an early test on raising a child and when to push, which battles to fight, how to understand, support and help them grow in all one swoop. Or in this case, game plan.

I don’t know all the answers, nor as he grows wiser in his preschool years do I seem to know what’s best for him, but what I do know is this: I will sit on those sidelines with you. I won’t breathe a word of disrespect, push you to do something you’re uncomfortable with or have ridiculous expectations for the three minor years you’ve been on this earth. Because you’ll figure out you, in your own time, and I’ll be there supporting you the whole way. Even if it means 90 bucks down the drain, parental stares of judgment, misuse of a darling branded sports shirt and two hours of a lazy Sunday we’ll never get back.

Because I’m with you.

And there’s nowhere else I’d rather be.