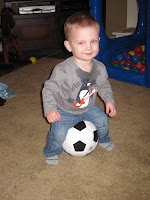 “Art…ART!” he said frantically, shaking the thin plastic stackers at me as if he were McGruber himself about to prevent a bomb going off in the home, a clean sheet of paper tucked under his arm just ready to be scribbled on. As if the casa didn’t already look as if a device had already exploded in it, but I digress…

It was hour three of the little dude being awake during the “Blizzard of Oz” and we’d already eaten, “swam” (bathed), “raked” (swept the floors), had multiple dance parties, played cars, did flashcards, tortured the animals, climbed the stairs, jumped on couches and beds, drew three Valentines, “cooked” (banged pots and pans), sifted through the dog food and unrolled the toilet paper. Among other things. And for the millionth time since 16 months ago I thought to myself: “THIS is why SAHM deserve to win the Pulitzer Prize. Or get five gold stars each day. Make a bzillion dollars. I don’t know…they’re superwomen. And I don’t know where they get an ounce of their strength, patience and well…energy! The thought alone made me shudder. Either that or grab my debit card and order all my SAHM girlfriends the royal spa treatment.

See, it’s tricky, because it’s a bit of a conundrum as there is no place else I’d rather be than with my child and family as a whole. Never. But sometimes in the moment (example: hour three), I ponder just how we’re going to survive it. But, like soldiers in combat, we gotta have a game plan. And with 17 inches of snow mounting the house and the wind whipping at -20, we went to plan B – break out “The Toddler's Busy Book." And you know what? It worked like a charm.

Because I became a kid at heart again. And his grew with excitement. And there was a whole lotta love. You know how I know?

Ok, so it was while he was wrestling. With my clean, folded stack of laundry. While dropping graham crackers and milk treads in his path.

But I wouldn’t trade it for anything.

So thank you, dear book, for offering the creative activities such as the blanket toss, mask making, water tricks and so much more. Because you gave me the best of my kiddo…and that’s the best gift a gal can ask for. And because the only “to do” on my list for this rare “adult snow day” should be 1. Love my son. Unconditionally. Relentlessly. Fearlessly. Selflessly.

Now that’s one toddler to do I can live with…
Posted by Meg at Wednesday, February 02, 2011