The Rack is the Mac!

Mac Daddy that is…particularly for the shopping obsessed such as myself. 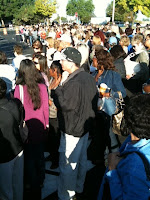 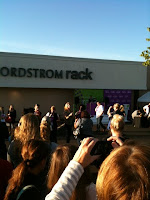 First thoughts: a) why am I not there? b) I should really be there c) can’t believe I’m missing this d) how did those men get dragged into that? They must really love their wives e) I hope my Mom has a strategy f) she should definitely start with handbags.

And indeed, she did, as she always does – my fabulous, superstar, will run all over town to get just the right thing Mom. Gah love her.

So after waiting in line for 90 minutes, witnessing fun contests and a particularly joyous dude on a microphone coupled with another guy who tripped over the curb in excitement, so much so an ambulance was called, Mom made it into the first 30 who wandered in and got dibs on the fabu merchandise. (PS: the man is ok and really he actually scores points because his dramatic fall meant a PR scheme for Rack employees, which resulted in a three-minute early entrance time). (PPSS: what is with these men? Fainting on the job of shopping is woman’s work!)

Several phone calls later, a few elbows thrown by my ever-tiny but not to be underestimated Mama and she scored three super fun sparkly shirts just her daughter’s size and style, a few sport bottles, a ring, OPI polish and drum roll: a Kate Spade large, silver, sparkly tote from this season.

I don’t know how many times I’m going to hit the place in a week but I anticipate it’s gonna be a lot…you know, if that whole raising a two-year old, working, exercising, preparing meals and catching up with family and friends thing doesn’t get in the way. Because I’m nearly certain there are more shoes, jewels, boys’ clothes and athletic wear to be had.

And not only that, but Mom reports the place is flawlessly clean, employs fabulously fun and helpful team members and lines move like lightning.

And thanks Ma, you’re the BEST! For a million reasons, but one of them definitely being your Rack scores!
Posted by Meg at Thursday, September 29, 2011