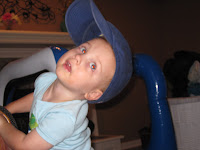 "Bug, what do you want to be for Halloween?" I asked curiously, a touch of excitement and encouragement in my voice in anticipation of him spilling the beans at his now oh-so-mature age of nearly two.

"HOMIE!" he shout, his blue eyes lighting up as if he just discovered ice cream was waiting for him downstairs.

So like all toddler tricks, I ignore the inappropriate answer and ask again: "what do you want to be for Halloween this year, buddy?"

After a few more attempts we arrive at potentially a Ring Master (thank you Yo Gabba Gabba), but the vote is still for "homie."

And as you all know, this just ain't gonna fly.

Seriously - where does he hear this stuff anyway?! His claim is a "man" says it...Lord knows who he is encountering in his active social life as a toddler to pick up these queues. Though I have a sneaking suspicion Daddy may have something to do with it, though he claims he doesn't and little dude generally does rat his father out (thus how I learned why he was shouting "dangit!"

I scramble back through time to recall if I'd purchased one of those GAP or Nordy's tee that says "homie" on them, but alas come up with nothing. I give up. And I'm starting to get nearer to waving the white flag for his Halloween costume.

So what ideas do you have for innovative and affordable? What will your kids disguise themselves as this year?
Posted by Meg at Wednesday, September 07, 2011

If I had a kid, the only thing he'd be this year is an Angry Bird....or...you and your husband could go as Angry Birds and Lawson could be the little green pig!