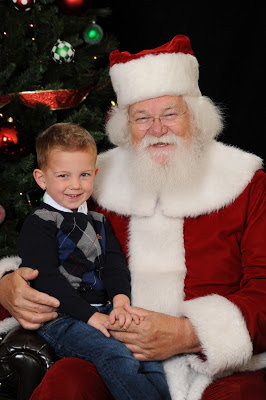 He'd been practicing for weeks, responding to adult prodding on just what he wanted for the season of merry and bright. Together we walked through the drill of seeing Santa, what the place would look like, the red suit, his warm laughter and even contemplated on the realness of his beard, curious as to what would happen if he tried to tug on it. A promise of a candy cane, some strong listening ears from the Big Man himself and a bit of a bribe to wear "handsome clothes" and we were off.

"I don't know - he seems pretty comfortable and excited this year - do you really think he'll do it?" I whisper excitedly to the hubs as we made our way out south toward our favorite Santa site. We giggled at the previous experiences: first, a newborn tucked soundly in Santa's arms, uknowningly having his picture snapped except for our gasps when St. Nick nearly dropped him with the aid of his slippery white gloves. Year two, pretty decent with some curious stares and the distraction of a book. Third year: hell to the no with tears, fears and finally a dog toy in the photo that finally led to the closest thing we could call a shot. To this year:


Shooting across the parking lot, he caught Santa's eye from his marketing poster, marveling that we had found the North Pole and anticipating all that lay behind those glass doors. Heading straight for the line and even avoiding the toys, he danced around with slight patience, taking every chance he could to peek behind the curtain, unphased by the younger ones that shouted their concerns of "where the hell am I and who is this bearded man?!" He talked non-stop, plotting where he was going to perch, what he was going to share, how he was going to smile and more (who says setting expectations doesn't work with 3yos?!). Then, just as his aptitude toward calm for the big moment prepared to cease, his name was called and he walked in with the confidence of a superstar preparing for his opening act.


Up on the lap he went with little instruction from Santa, the two of us disappearing in the background as we choked up at his hilarious antics we get so much of at home as Santa did his best to sort through what it all meant. Ticking through his list perfectly and providing clarifying points for Santa, they read together, chatted and even (gasp) hugged, creating the magic of Christmas you always hear of that exists for young children. We soaked in each little moment, from his expressions, his tumbling words, his relaxed body language and the ease and comfort in which he looked directly at the Big Man himself and shared what was most important to him in the entire world at that point of time in his universe.  Though we had no expectations, desires or push for how this interaction would go, it couldn't have been more perfect. 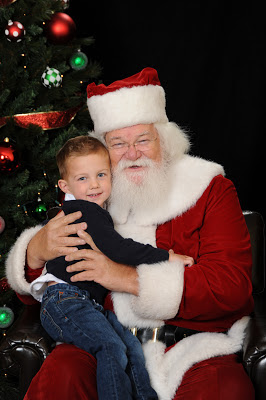 So maybe three is the magic number for Santa and more? Regardless, Santa v4.0 was the best yet. We can only hope the magic and real reason for the season lives on in his little, precious heart for many more years to come.

Here's to you and yours and finding your own jollies with St. Nick!

Bonus: a sneak preview of his goofy version of his Christmas program content. Goofball!:

PS: One word of warning: if you go this early, prepare to answer 100 times per day the inquiry as to when exactly that Star Wars "wand" will appear under the tree. But use the trick of answering a question with a question? Totally worth it to have the darling photos displayed around your house for the whole season!