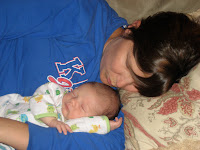 “Yes, switched at surgery – that’s what we think happened,” I say to the nurse on the line who mechanically whisks through a list of questions, barely processing my reports as it was not a life or death situation.

“Nope,” I say. “Nothing. Just a missing smile and new character that can only be described as Oscar the Grouch.”

Giving in and most likely mentally labeling me as a “first time Mom,” she sets me up with Dr. S as Dr. D is out of town and gets me in an hour from the call date. Rearranging my day to make the visit happen, I speed off to daycare, half excited to see his darling, albeit cranky face just a mere few hours after having started the workday. We had spent the wee hours of yet another morning tucked in the confines of his nursery chair, rocking…rocking…rocking…but not to sleep like the animals do in “The Going to Bed Book.” In this case we were more reenacting “The Grinch Who Stole Christmas” when all the Whos found out their toys were missing. Read: inconsolable crocodile tears without a known cause.

As I arrive at daycare, he catches my eye through the kid-drawn windowpane and attempts to catapult himself out of his highchair, plowing objects such as sippy cups, puffs and even humans out of the way in an effort to reach my arms. I watch as one of his teachers manages a half-smile and does her best to wrestle clean a pair of sticky hands linked to a super-wriggly 21-pound toddler body. I once again find myself thinking: “I hope these gals are pulling in some bank for all the hard work they do with our kiddos…”

On our drive, I look back to find him deep in thought, his truck blanket with the little tabs wrapped loosely around his thumb, his blue eyes lighting up with the warmth of the sky. Though he’s not smiling, I can feel that pieces of his heart are at ease, and I get the familiar feeling that I’m whole again – just like any time my son is nearby. And suddenly, four a.m., two extra trips to daycare and a rough three weeks are worn away like sand overtaken by the evening tide. I marvel at the complexity that is already so alive in his little mind – the preferences he’s building, the joy he’s experiencing, the thirst he has for learning – and make a mental note to capture yet another one of these magical moments for all time. Because, as everyone says, it all just goes too fast.

Thirty minutes pass and I snap out of my trance as we’re called back and pulled into a room that houses the most amazing wooden dragon in one corner, leaving us mesmerized and me ecstactic that I don’t have to rummage to find a tongue compressor to entertain him until the doctor walks in. Soon, greetings are exchanged, body parts are checked and we are on our way with a clean bill of health (phew!), the assertion the ear tubes still look great and advice to “let him cry it out a bit longer” as a way to nab these anonymous new behavior changes. Not to mention what I sensed was a little bit of “did I really go to medical school all these years to deal with crap like this?” from the friendly doc, despite his best efforts to wave, giggle and smile with L and avoid rolling his eyes at me.

Calmer, I return L to school and my own self to work, leaving a few minutes to once again Google what this could all be about. Night waking, night terrors, growth spurts, teeth, UTIs, tummy problems…so many options. And what I discovered was:

Me who is struggling to let her baby boy grow into the independent, strong-willed character that she so lustfully admires in others. Me who shudders when he pushes away or cannot be consoled by his mother’s unconditional love. Me who frets at setting certain boundaries because of the faux ramifications it could mean for our relationship later down the line. Me who broke down upon receiving his first one-year birthday card in the mail last week. Me who, deep down, thought he was always going to be that little burrito that needed his Momma for all things living and breathing. Me.

So now whose turn is it to visit the doctor?