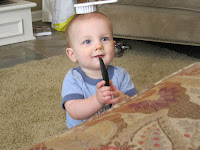 Turns out the kiddo is allergic. Of course we found this out the hard way on a Sunday morning, basking in the fall sun, enjoying breakfast as a family for once when it hit. I was lazily sprawled on the couch, one leg flung over the side, the other half of me curled into a magazine as I tried to pretend I was sleeping in at some beachside resort. Meanwhile, Daddy is taking one for the team and preparing the babe’s breakfast of eggs and peanut butter toast, none of which he hadn’t tried at least once before. As fussing arose from the prince’s chair (ok, a space saver high chair), I couldn’t help but meddle (I’m the Mom, ok?) and check out the situation. I heard Mike mumble something about “what’d you rub in your eye buddy?” which of course roused me to actually assert my body to the upright position and scope it out.

I quickly pieced together what was happening as my eyes darted back and forth to the toast, then to his swelling face, then back to the toast, now onto his coated eyes and waited for the labored breathing to begin. I remember asking Mike to remain calm as I wildly ran upstairs, a not so gazelle like move that ended up throwing both boys over the edge because they weren’t sure what was going on. Grabbing for the Benadryl, Google and an iPhone (reviewing that now, I wonder if people even 20 years ago would ever list those as emergency prep items), I began calculating in my head how quickly an ambulance really could get to BFE, where they would take us and the millions of things that could go wrong. Being in health care improvement has it’s perks, but with a little knowledge also comes fear – you could call it power, but when a Momma’s kid is in this kind of situation, nothing but fear is left.

As he sat there before me, in all his glory – Mr. Anaphylactic shock himself – all I could think of as my fingers darted across the keys 9-1-1 and Children’s Mercy that thank goodness were locked into my phone (thank you self-help books) was “not on my watch buster – if anything ever happened to you – well, there’s no point in going on.” Full.on.Momma.Bear.Mode. Looking back I can’t pinpoint if it’s cool or really, really creepy. There are no words to describe the feelings felt in those moments that feel like hours, where you’d do anything to trade places with the situation you’re child is in, to release the pain, the fear, the unknown…

Minutes later his breathing slowed as I continued assessment with the 9-1-1 dispatcher, then again with the CMH clinician. A smile returned to his puffy, swollen eyes and face – his grin flowing into the flesh that didn’t usually surround the panels of his face. Even with this bizarre-like mask, he returned to playing cars, eating the remote and banging around pots and pans like it was nothing at all. A few doses of Benadryl, some sleep and a few Zen-like breaths and prayers, we were in the clear. Well, the little man and I were – I’m not sure if Daddy has fully recovered. I seem to recall frantic cursing and stomping and all out mayhem, providing confirmation that indeed, Mommy will have to be home in all emergent situations lest things really go off the deep end.

Today we visited our primary care and allergist, who went over the duties of an Epi pen, what to look out for, the test results and more. On a lighter note, the kid has a head the size of a bowling ball (which houses a brilliant brain I might add), is long and lean, an insatiable appetite and the energy of a Jack Russell terrier. Plus, an adorable, flirty smile and personality to match. So what if he doesn’t have teeth or can’t have peanut M&Ms…

we’re nuts about him anyway.
Posted by Meg at Wednesday, September 29, 2010

Wow! That is a nightmare come true. I'm super impressed with your cool as a cucumber reaction. I can only hope I would react so appropriately in the same situation. Good job Mom!