A Bite Among Friends

You may think you're entering into a post about a fabulous evening out with the girls, and perhaps you're even asking what new joint we hit up, the gossip we cruised through or the events that occurred afterward. Or maybe even what we wore. Probably not because this isn't OK! magazine, but who knows? Anyway, that's not the case. Instead, I'd like to share what I walked into the other day when picking up the babe from his first day in the toddler room:

"Oh, hi Megan - he's out back. He had a really good day, but..."I watched the director's face contort a bit, wondering exactly how to interpret what the creases, frowns and half-smiles all meant. My mind went immediately to the fact he had pooped on the floor, wouldn't sleep, threw a burrito across the room or heaved in a corner due to all the excitement. So hey, yeah, that's a little graphic, but come on now, we're talking about a toddler here. Nothing can really be too gross, dramatic or surprising, can it? Because these are real, real events people...

As she began to explain he received his first "boo boo" at school today, I imagined a black eye, a little bloody nose, scraped knee or the ever-consistent head bump. But instead, I was met with this: 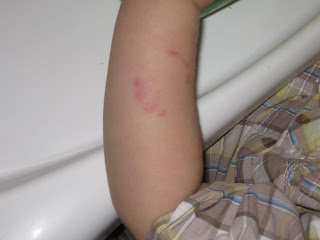 A bite among "friends." His boo boo note read: "My friend accidentally used his mouth instead of his words over a toy, so I suffered a bite." It went on to say they iced it, had snuggle time and was signed off by an administrator. Serious stuff for a boo boo. I almost felt like submitting the note to HIPAA.

Apparently there was a toy incident. And given that L has no teeth, is new to the classroom and isn't quite yet walking, I'm going with the notion he was being hazed. Or initiated. I'm not sure which. Either way, I'm pretty sure this kid, whoever he is, may not end up on L's "friends" list anytime soon. Either that or they'll move forward in true boy fashion and forget it all happened. As a Mama Bear, I'm considering going all CSI on the mark and give the kid a talking to, but given his 2-second attention span, I'm not sure it will influence him much.

Guess they don't call it the ankle biter room for nothin'...so what's with the forearm?

Cheers to you, little buddy. Day 2 is bound to be a best day in the toddler room yet!
Posted by Meg at Wednesday, September 15, 2010