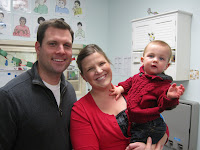 "His red sweater is soooo cute, we can hardly stand it…" Miss Sarah says to me as I prepared to enter the classroom, pretending that my mascara was acting up as I swiped away a few quick tears. For minutes I had been staring at him through the plexiglass, marveling at his behavior, watching as he swayed his little body back and forth, singing the snack song with a look that can only be described as absolute glee lining his face. I don't know if it was the fact that food was about to be placed in front of him or the joy of the lyrics, but that little man was one happy camper.

Soon, it was circle time, and having arrived early, I gathered him in my arms, holding on to his warm embrace as he took his time warming back up to the classroom, the contrast of having Momma there so vastly different than most afternoons. As the flashcards came out, so too did his little grin and jolly sounds, all in a chorus with his little friends as they repeated what sound a cow makes, jingling keys, cats and more. Daddy joined us, video camera in hand while nicely-wrapped children's books were exchanged. We laughed that his "soul mate" Gabby, dressed in red velour of course, received yet another gift from Lawson…because really, if you saw them together, you'd agree that he's already given her his heart… 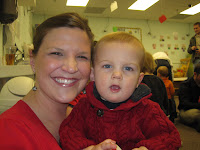 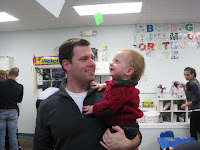 And that's when it got good - or so I imagined what Lawson was thinking as he made his way to a chair so small it could only be meant for a 15-month old, it's tiny metal legs holding tight as he climbed up to dine. A plate lined with delicious, parent-delivered treats lay before him and he assumed the position, loading a fork in one hand and using the other as a scoop. And when those two were full, he went full on dog-style, using his mouth to snatch up those few bites that surely could be squeezed into his squirrel pouch cheeks he was sporting. Like the dinosaurs we read about in his books each morning, he seemed to have a gift for foraging through the fruits, vegetables and cheeses and head straight for the red-iced cupcakes: 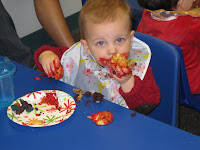 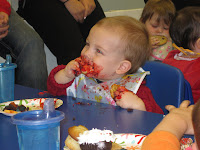 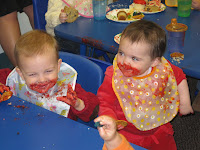 He enjoyed the red deliciousness so much, that he even took the time to dunk his organic Monkey Bars I spent over an hour preparing that morning into the spread. Good boy! And of course Gabby was in on it too, because after all, she was the one to pass along the amazing trick of how to successfully devour a banana in one bite. What are friends for if not tricks like such?

The small room lined with primary colors, hand-drawn artwork and funny snapshots taken throughout their days lit up with laughter as the teachers described that one was a messy table while the other were the cleaner kids. Parents asked us "does he always eat that much?," marveled at our composure as he began to cover himself deeper and deeper in red dye, waiting for a reaction other than "grab the camera!" or "yay for you honey!," and looked a little perplexed that we'd share nose hugs and actually wash our own child's hands covered in goo, putting our own attire in danger.

And through all this, all we remembered later that evening as we recalled our day and all that we were grateful for is yes, we'll wear red for the holidays. We'll wear yogurt on our shoulders. Boogies on our buttons. Bananas on our kneecaps. Crumbs in our socks. And spaghetti on our shirt sleeves. Because we wear you, day in and day out. In our minds. In our hearts. In the very deep, deep corners of our souls.

So yes, dear son, we'll wear red this holiday just for you, and all the days to follow…even if it is in the form of frosting. Because after all, there just isn't anything sweeter than your smile.

Cheers to your second annual school party, bug! We love you and are so, so proud of you...
Posted by Meg at Sunday, December 19, 2010