“We’re not going…he’s just a baby. You’re trying to make him grow up too fast,” Mike said, his arms crossed over his chest like a shied of armor worn when going into battle. Which, let’s face it, can tend to be the case when he’s fighting against something I’m convinced should happen…

In this case, it was Lawson’s first haircut.

And as you can imagine…

Between the peer pressure of hearing “wow, his hair’s really grown” or people stroking it into a wispy ponytail, then agreeing with me it’s a bit of a mullet, plus the fact we hadn’t had too tragic of a milestone lately, I decided to succumb and just go for it. So off to Sheer Madness we went.

This wasn’t the best plan as the stakes were already high given he’d been battling a fever and sinus infection over the past week, growing a pair of bottom teeth and needing more sleep than a bear in winter. But given all this, we too had caught a case of cabin fever and figured a quick trip to the kiddy barber wouldn’t be the end of the world. And in fact, it wasn’t!

We entered the door, the chill of winter quickly snapping it shut behind us and took in the sights and smells of a salon designed solely with children in mind. Fire engine, castles and animal chairs lines the walls, while toys marked with prices crowded every corner. On the east side, a pair of pink curtains separated the small area from the rest, designated for princesses looking for a pamper party on one of their birthday soirees. Screams of unhappy children filled the background, while some sat quietly and a myriad of Disney movies echoed in between. To us, this seemed to make sense. And for the most part, it did for little guy too…at first.

Slightly hesitant but not too far from willing, he climbed into the red car seat as Sherrie made arrangements for his favorite movie as an appetizer to his snip snip. Rigid as a board, he sat with his back straight, only his eyes darting back and forth as he took in what was around him. A “before” picture was snapped (for that extra 10 bucks we were spending for them to slap a bad digital photo with a lock of his hair to a piece of cardboard), and the cutting began. 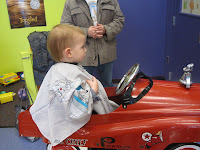 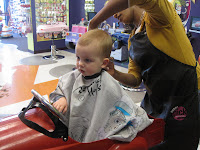 Still sitting as if he were waiting for a colonoscopy, his jaw was slack, his eyes darkening with concern. The three of us talked in idle chatter, complimenting him on his ways and preparing him for each step as she went along. As she pushed his neck down, that familiar face that still feels so real when I’m trying not to lose it in a business meeting started to creep in, and I felt his anxiety and tension so deeply it was if I had swallowed a brick of emotion. The tears fell gently at first, not accompanied by a frown or sound, but that seemed to say “ok, I’ve had enough of whatever we have going on here now!” Soon, they became higher pitched wails that would make any Mama Bear want to whisk him out of the seat, but luckily we were on the last of the electric razor over the ears. 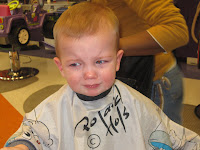 And just like that, it was over. So the “after” photo was taken, the ball kicked around the salon, a car discovered that just couldn’t be taken home with us (that's where the next set of tears came from) and the cut had been made. 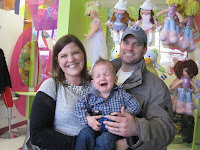 Charming. Adorable. And complete with a Mohawk per Mom’s request and much to Dad’s dismay. 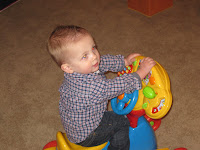 So gold stars to all who survived.

And please don’t tell a soul that although I wouldn’t trade this clean cut adorable little face for anything…I sometimes, just sometimes miss that mullet.
Posted by Meg at Saturday, January 29, 2011

I love reading your stories! Totally feel like I was there by just reading the words! Amazing!