Little Bit at a Time

So the whole New Years resolutions/vision board/just write it on a post-it at least thing didn’t so much happen this month. And now that we’re rollin’ into February, I’m just going to go ahead and return those paints and artsy fartsy fun things that would have made for a killer goal-oriented piece of art to hang in our bathroom. My guess is that’s ok, since things like “hanging a picture” is generally on about a two to three year timeline these days. Instead, we’re taking a stab at plan B:

The declutter and organize calendar. Found on Pinterest, of course.

Admittedly we’re sitting at January 21 with only two items crossed off, but hey, it’s a start right? And speaking of new beginnings, I tackled our junk drawer at 6:42 a.m. today: 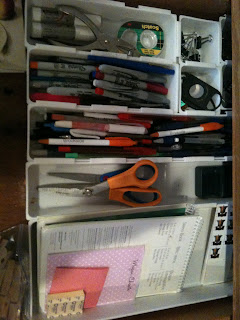 And I’m not even nesting or hormonal. That’s how you know you’re house has driven you to the brink of insanity.

Secretly, I’m so pumped about the junk drawer cleanup that I nearly posted a picture on Facebook. And texted 10 of my closes friends. Ok, and I did show a photo to my Mom. I mean, it’s been one of those dark crevices that you constantly have to open because a guest asks you for the one item that rests right inside that drawer, right? Totally. And then you have to do that whole announcement about how it’s a place to stash your trash, yadda yadda.

I’m quickly discovering I don’t have an excuse for the rest of the house. And also? I don’t know what to do with the crap that I took out of there and requires a home, so I stuck it in a Target bag to deal with another day. But still:

The junk drawer is a breath of fresh air.