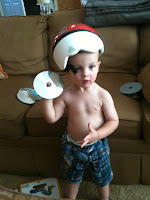 1.) He beat boxes. Literally. Thanks for the lessons, Biz Markie.
2.) Breakdancing is a regular occurrence, generally between the hours of 7:30 and 8:30 p.m. My guess is a rapper’s timeframe is slightly later in da club.
3.) His rhymes are original. Sure it’s more likely they include the word “reindeer,” “duck” or “clown” vs. something hip or hop, but hey, he’s rhyming.
4.) A head bob always follows a good beat in the car. And in rhythm. You go boy.
5.) Walking is not generally how he flows. He makes his way to a from with a bit of a swagger. And by swagger I may mean robot arms, leg bends, squats, skips, etc. Surely that’s swag for a two-year old.
6.) He digs bling, particularly heavy necklaces. In fact, he chose Daddy’s Jayhawk Mardi Gras beads as his show-and-tell item the other day.
7.) He’s constantly sporting shades. Recently he’s moved to aviators. So Kanye.
8.)“Hey gril!” is a frequent phrase used in public places when he’s talking to small female children who can’t really hear him. Gril=girl. And he’s more shouting because they are doing something he prefers to be doing, but this still counts as I imagine it will come out in a smug grin and smooth tone one day. PS: I dread this day.
9.) He likes to count money and throw it in the air. And yes, we catch it on video. Small differentiator: they’re likely pennies from his bank vs. the benjamins spotted on BET.
10.) Rockin’ the mic is his thing. He grips it close and does shout outs directly into it as he prances about the fireplace, aka “stage.”

Now whether this will help pay his way through college or our nursing home bills is still up in the air, but for now, it sure is a lot of fun to watch.