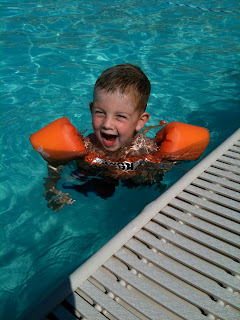 “That’s it buddy, go for the rings!” I cheered and clapped from the poolside, my neon toes dipped carelessly in the welcoming cool of the water. Hubs and little dude splashed inches away, a smiley-faced life jacket and actual grins lighting up their faces as the wee one jumped off the side over and over again.

It was our second outing to the chlorine-laden temple that weekend, serving as our go-to as temps continued to soar above 100 and staying inside had no longer become an option for our rambunctious preschooler. Nearing the dinner hour on Sunday it was packed with hoards of children reminding me that summer really meant sunscreen, goggles and giggles while their adults sipped Arnold Palmers nearby. I relished in the people watching (at times cursing the fact we chose a gym of all places to make our pool home – hello perfect bodies of women in their 40s and 50s) and delighted in my husband’s shrieks of joy as inches of water poured over him with our son’s every vault from the poolside. It was remarkable to watch his confidence grow after just a few swimming lessons, his dog paddling growing vigorous and strong as he reached the side, his listening for fish as he submerged his cheeks and the attempts to pull himself under and blow bubbles as he inhaled gobs of water, grinning the whole time. Overall, it was pretty magical, until…

The shriek of a whistle cuts across the ruckus of the pool patrons and a thin, teenaged lifeguard throws up his fist in a symbol I did not recognize from my safety training days. Children began screaming and adults pull them from the water, perching on the sidelines, some looking confused as other teens join the gaggle of lifeguards nearby. I begin to panic, the events of last week too fresh in my heart and mind to bear an incident even remotely happening nearby and I begin to gasp for breaths, embracing my own son tightly and removing him from the water as we attempt to sort out what’s going on underneath the umbrella fountain past the ropes.

Though my relief only invades briefly, I notice no one is running, jumping or diving in to assist and I begin to wrap my brain around what this evacuation could really mean. Lifeguards do a quick huddle, then divide and conquer on communicating to fellow waders the big news:

Someone sh*t in the pool.

Apparently, this is serious sh*t when someone sh*ts in the pool. I mean full on evacuation, take it to the inside, don’t look back type of situation.

I think I even heard several parents use words like “biohazard,” “shadoobie” and “poop” as the escapade was described. Even trying to sell it to our son was a sham as he stared at kids nearby, clutching their stomachs with laughter and groaning “ewwww!” as the Baby Ruth slowly made it’s way to the deep end. Coming up with an answer to his curious inquiry as to why the poop was swimming and can’t they just let the poop enjoy his day in the pool became too challenging, so we just told him it was closing up for the day because the lifeguards needed a rest.

I mean, surely they did after all that feces fetching anyway, right?

From then on all I remember is a long pole, a net and the fact these teens are learning a valuable lessons early in life:

Sometimes you gotta deal with sh*t.

Clapping ensued as the number two was rescued from the deep, dark depths of the four-foot section and life went on. Well, for all of us I guess. I’m not sure about the parents whose kid decided that moment and environment was the place to let loose, but I imagine they’re welcome back again? You know, right after the biohazard cleanup and the public mockery that their tiny child had the ability to force out hundreds of pool goers with one little turd.

Sh*t. Not just for dogs or Dads anymore, but pools too.

P.S.: While we’re on the inappropriate topic, I’m thrilled to announce little dude has mastered the art of number twos in the art of “potty learning”, many months after tackling number ones. We’re thinking of taking him somewhere to celebrate, but likely not a pool.

Nope – definitely not a pool…

Wow - I thought that was just a scene from Caddyshack, but clearly, I WAS WRONG. Doody in the poooool!!!!

Who'd have thunk you would ever have not one, not two, but THREE Oh Shit posts to write about. That. Is. Awesome.