The sun crept into the corners of the 4Runner, the beams of light bouncing off the red-blond hair accented with the blue eyes of our beloved toddler. We sat silently on our drive home, reminiscing on the beautiful simplicity of the weekend spent with family, accomplishing house projects and just enjoying one another. The sound of "Yo Gabba Gabba" filled the space, complete with light hums and whispers of the words he knew, causing little smiles to creep up on the corners of our mouths. Life is good. Great even. Nearly perfect.

Until we enter the house and find this: 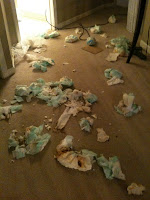 Sound that screech noise when all good things come to an end or when there is a Saved by the Bell time out.

P.P.S.S.: As if the clean-up wasn't rough enough (though the hubs did not have to sport the gas mask this time), our son's attachment to cleanliness meant it took me nearly two hours to convince him to sleep because he was uber concerned about "Ellie's BIG MESS." In addition, Ellie the dog had already betrayed the little dude once today as she "ate Paul," (his "Pat the Bunny" book where Paul and Judy are the characters). Looks like she's stepping up her game in the sibling rivalry department...
Posted by Meg at Sunday, August 28, 2011