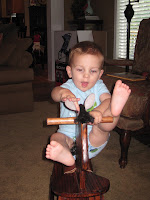 “Wait – he did wwwaaa?” I said, combing the fine, blond-red hair from across my son’s forehead, assessing the damage as he worked to squiggle out of my arms and go on to the next daredevil stunt.

“Jumped.off.the.fireplace.like.a.leaping.banshee.with.a.blanket.as.a.superman.cape.that.he.tripped.on,” the hubs said, clearly more traumatized from the event than any of us.

And so it begins, the much anticipated (ok, not so much) boyness that will likely now remain a part of our household until he becomes a teenager that ends up sleeping most of the day. Almost overnight, our once quasi-timid son who checked with me before he climbed down the stairs with the railing, shared cautious eyes as he went to put slowly perch on the couch, sat idly by while mass chaos surrounded him in groups of other kids…had become a part of it all. Almost like a toddler gang initiation or something. Or did Nana and Papa teach him this to get back at us while we went away for our first trip over the weekend???

Or maybe he’s just a boy.

It’s been two days since we’ve been back and suddenly my careful 23-month old resembles the boys that my favorite blogger posts about, having accomplished the following in just the last 48 hours: throttled a chair climbing into his booster, dented a wood door for “wow, that was FAST RUNNING!” activities from the hallway to the playroom, scales his new bed effortlessly like a chimp in the Zoo, leapt with no warning 10 bzillion times into the swimming pool, catching his head a few times and finding it hilarious, attempted to run into traffic and up to complete strangers, citing he had to fetch his basketball he’d just thrown into the street, initiated fake falls over and over again like Brad Pitt’s stunt double, rejoicing in every bloody scrape he came up with and golf-sized bruises on his noggin, rode the dog like a rodeo clown, despite her clawing at him to back up off, wrestled with Daddy like he’s in the WWF, supermanned his way off a set of concrete steps and attempted what looked like extreme sporting moves on his new trike. And did you see what happened when I gave him a beautiful windmill thingy?

Um, yah, time to program Children’s urgent care number in the ol' iPhone and find the nearest ER I guess…

I can only imagine what he’ll do next and what it will take for me to keep up with him, let alone give him some kind of look other than disbelief.

But as they say, boys will be boys. And this girl better adjust.

Wow. We are in for a wild ride with these crazy boys!