Remember when I was all delighted to share with you the nursery (ok fine, toddler room) was 98-percent complete and I posted pics and had most everything squared away? Then three days later we had the "Curious George" incident which called for Room Review v.3? Well, here she is: 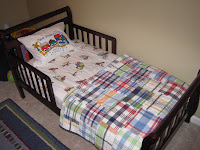 After some thought, we ran out and purchased an inexpensive toddler bed at Nebraska Furniture Mart, opting not to put the transition piece in his crib. For some reason, I just couldn't get past how much it looked like Ellie's kennel with an escape hatch: 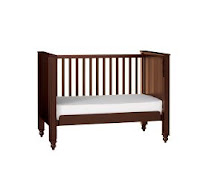 And here he is, more delighted than ever, constantly chattering and sharing with the world his journeys and admiration for his big boy bed. 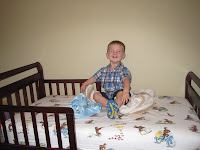 Admittedly, the first night was a bit rough, but if I had to guess it would be the large piece of birthday cake he consumed at school followed hours later by his cupcake of choice for his "big boy bed" party, complete with songs, celebration, family and lots of laughter. Oh, and shouting renditions of "No More Monkeys Jumping on the Bed" - how does he even know that song?!

But since then, it's been a dream, him chatting incessantly and sharing with strangers about his monkey sheets, big boy bed, how he can leap off the side, hide his money in it and have pillow fights. I guess he's moved on from the shoes...

How we ever got so lucky to have a laid back (though let's not forget "active" and "spirited") kiddo that transitions so effortlessly from these things his parents (read: Mom) obsess, agonize and fear, we'll never know. But we'll take it. And spend each day being grateful for it.

And wish him the sweetest dreams...in that good ol' big boy bed.