“So, what if he like, paints a MURAL or something? Or balloons?!” my girlfriends half gasped, half giggled around the mahogany table that housed bottles of wine, a quickly-emptied bowl of chips and guacamole and sets of loving, some-manicured hands.

“Dude, I don’t know, but he’s messing with my design mojo – and everyone knows not to front with a preggo that’s in nesting mode,” I said, my posture slumping as the hours grew heavy on my expanding body.

For weeks, the hubs has been talking of his vision for the paint for the nursery, and despite my every attempt to gush about the pins already in place, the ease of hiring a painter (“saves you time and energy!”) and how this was the LAST nursery we’d do so let’s go totally different and with what we love…he wasn’t giving in. That and my ability to recognize when a man engages and cares (particularly when it comes to his unborn son), you must embrace and support the moment, even if it means polka dots on what were supposed to be your perfectly shaded gray walls.

Here’s a look at what I had in mind for our youngest son’s room, a combination of images from others who prioritized creativity before me:

A bit out of the ordinary and far from the Pottery Barn catalogue that was his brother’s, I dreamed of Etsy finds, chevron afghans, unique, customized accessories and bold aqua and oranges with a touch of IKEA to serve as his theme. With many similar items within the budget purchased, I began to gather and collect and line the room with a mix of little dude’s old things along with the new that marked this vision. We had found the perfect shade of gray and despite my Mom’s warnings it would clash with the slightly gold-toned fraise carpet, I was in love. Mom and hubs on the other hand…not so much. I sighed as my pinteresting dreams slowly felt as if they were slipping away, but let it go thinking it may pass with the regular chaos and deadlines of our everyday lives.

Then came MLK Day, which meant a day off for the spouse and the painting began. I watched as he dragged in shades of bright orange, Jayhawk blue and neutrals and took big breaths as I imagined our new son hypnotized by the neon that was his walls. Reminding myself it was just a room and what a blessing it was he had one at all, I listened as behind closed doors the rock blared, the roll of the brush cascaded down the walls and creativity began.

Two days later, I anticipated him inviting me in and lo and behold, the offer lay before me. For hours I’d been practicing my response – a warm hug followed by a large thanks and excitement in my eyes, no matter how forced – and prepared myself to enter the abyss that was once the subtle, funky dream I had for our last kiddo to make him at home. Bracing myself, I entered into: 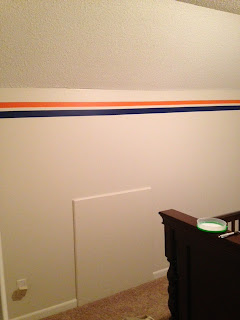 Stripes. Two small, perfectly plotted and well-painted stripes done with love, by a son’s father who cared enough to tape, prod, spackle and place these straight lines above his crib.

Stripes! I could live with stripes. And the argument they needed to layer the two walls beside it to look finished, even though it did go against my plan for the perfectly placed prints I had pre-selected just for the space.

Because in the end, all that matters is love, and this, my friends, was an act of the unconditional. Two vacation days dedicated to ruling, taping, thinking and stroking the perfect lines for his son’s nursery. Two days of showing his love through elbow grease, creativity and effort. Two days of what could’ve been filled with basketball, Sports Center and gym time, but instead was ankle deep in paint samples. The thoughtful approach as to how it went with the curtains I’d already selected and the organizer baskets that line the changing table. To get it as close to the pics as he could with his own little twist of taste.

So you know what? I’m putting aside my design diva/psychotic nesting phase and loving it too.

Because love is all you need. And maybe a few stripes…

That last comment was from LeisaHammett.com I'm back on trying to figure out why my old blogger profile still posts. Sorry.