The Truth About the Toilet Paper Roll 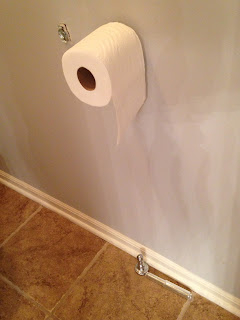 "So sir, you're going to be disappointed, because you have another thing on your 'honey-do' list," the paramedic said as she and two others hauled my husband off the ground, the weight of the day and all that had happened in the past hour weighing heavily on their shoulders and his. It just didn't seem like the time to mention that that thing had been hanging off the wall for approximately seven months. You know, when there are still pools of blood lining your tile and your husband is half asleep awaiting an ambulance ride and all. So I kept my mouth shut, despite just a day earlier I was considering how applicable that Pinterest post about laziness stood in our household these days. Suddenly, none of it mattered.

It all started Friday when the daycare report came home that indicated Squeak had a challenge with his tummy, and his tummy won. For 12 hours we held him as he moaned, not understanding what was happening as the flu took over his small form, his body rejecting the only substance he longed for day in and day out. Loads of laundry later, several phone calls to Children's Mercy and hours of pacing the hallways praying such a young baby would bounce back and hydrate, and he was suddenly in the clear. Phew.

But you know what that means...

Daddy was next and boy did he take the job of acquiring THE VIRUS as we adoringly now call it, seriously. Around 4 p.m. he disappeared, tending to himself and hiding away as he suffered through, embarrassed and fatigued that such a strand could take down a man of steel. Balancing the kids (read: quarantining them and getting them to bed), Cloroxing and dropping wet washcloths on the hubs' head, he finally retreated into a fitful sleep, or so I thought.

Pen poised, I finally sat down to some long overdue baby spoiling thank you cards when the sickening thud of body meets tile echoed to the family room where I lay below. Panic stricken and heart racing I headed to the master bath, a pool of crimson greeting me first as my stomach and heart leapt in different directions, while my mind and fingers magically found the 9-1-1 buttons on my miraculously charged phone. A friendly, calm voice walked me through pulse checks, breathing, compressions, not moving him and keeping me close until MedAct arrived, the heavy thud of their boots on my stairs a most welcoming sound. As the children continued to sleep, the mister came through after a short seizure, able to answer what year it was, who was in office and where he lay while he began to process what had happened and of course, that he was only in his skiivies.

Some patches, saline, time and an awkward wardrobe change later we were advised to take the ambulance to the nearest ER for some stitches, fluids and a CT. On our agenda, the husband of course refused the ride, his ability to process the hit to our budget still existent as he lay weak and recovering as we waited for my Dad to watch the children in the wee hours of the morning. Once he arrived, I provided limited instruction, got the husband into a vehicle and took off for the ER less than five miles away, only to have him seize once more in the car.

Several bouts of shouting, wheelchair racing, question answering and calming later, the husband was getting cleaned and juiced up, the color slowly returning to his chiseled cheekbones and his humor sprinkling in with his spirit as he cracked jokes with the physicians and nurses on staff. A clear CT, bags and bags of fluids and 10 stitches later and we were close to on our way, alerting the doc we'd be back for suture removal and potentially that vasectomy thing that was on our list. With a smile, he advised they couldn't be done in the same visit. Dang doctors - always trying to make some extra dough... 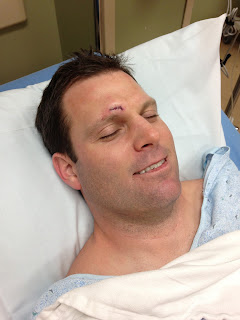 Returning home to a roused child, an anxious and germ-concerned father and a slumbering pre-schooler, we snuck in a few hours of sleep, only to awake to it being Mommy's turn.

Then my poor parents, who were just trying to help out.

Silver lining: none of us tried to go extreme with THE VIRUS and wind up in white gowns under flourescent lights. Perhaps it's because neither of those things are very flattering.

That and someone still needed to fix that damn toilet paper roll...

Here's hoping you and yours avoid THE VIRUS and are off to a happy, healthy school year! 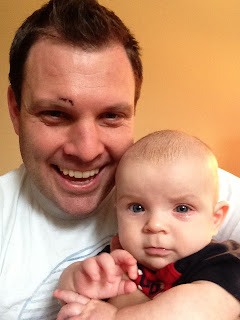 PS: to our neighbors who thought all those emergency vehicles were there to bust them for their itty, bitty bonfire...THANKS A LOT! :)

PPSS: Hubs thinks he can take the stitches out himself with a pair of scissors and some whiskey. You know, just like Rambo. For the record, this is a terrible idea.

Oh my gosh! I am so sorry this happened and so relieved that everyone is now doing better! xo