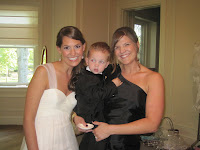 “Oh my goodness, he’d be honored! Do you want to hold some special, special, rings buddy?” I said through the side of my mouth to the little dude, balancing my iPhone with my shoulder and his weight with my other as he gave me a confused look. “Yes – we’ll do it – and we’ll practice lots!” I confirmed to the bride and groom, committing our then one-year old to ring bearer duties. After hanging up, I began to daydream of all the possibilities this could mean, from sporting an adorable mini tux, practicing “step together, step together” like in “Father of the Bride” and imagining what shennigans he would pull as he made his way to the alter on the big day that always makes the audience laugh.

So a year later, at age two, it all came true and more. And during the process, we learned a few things, like:

1. Buy the tux vs. rent: you save about half the dough and likely for a three and under crowd, it will fit better. And you won’t have to remove those stains they get on them, even if they just sport them for 20 minutes.

2. Cross your fingers the tux rental place is cool. Like ours, for example: they had a beach ball that they let him kick all over the store as we tried each piece on at a time in 30-min increments. Made for a wild Friday evening let me tell you. 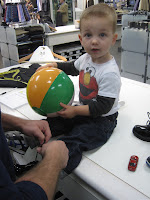 3. Order the shoes online. If you have a mini-skinny like my little dude who has short, wide feet, good shoes are hard to find and those rented hard-as-a-rock ginormous ones at the rental place just won’t cut it.. We scored an adorable patent leather pair with flexible bottoms at an inexpensive price in size six at online. In these he can run, jump and play in and adores so much, we frequently find him wandering the house in just a diaper, tee and these.

4. Practice. It doesn’t make perfect, but it sure is a lot of fun. We did the “step together” scene, breaking a few of our own plates along the way (the couple had him carrying a gorgeous dish with the rings) and had hours of fun which resulted in him puffing out his chest with pride and anticipating the big day. Plus you have some cute B-roll to text the bride and groom along the way.

5. Commit to bribery in advance. Talk about the fruit snacks that will wait at the end of the aisle. Have M&Ms on hand when you’re attempting to slap that tux on again and a special drink as he’s forced to “sit quietly” during the ceremony. Or better yet, do what the bride and groom did and have these awesome “distraction tools” that were meant for send-off décor but turned into “keep the ring bearer busy for hours” vehicles. 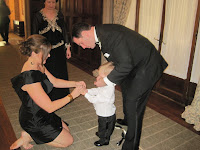 6. Have a plan A, B and C with one master in command. The whole thing is already totally overwhelming for the wee ones, so let the one he trusts the most (Mom or Dad) be the one barking instructions and giving encouragement. Add in much more and it becomes a complete circus. People mean well in their intentions, but one is truly enough to get through. And have a Vice President, such as Aunt Mary, who is a super woman and swoops in when things start going a little unexpectedly. 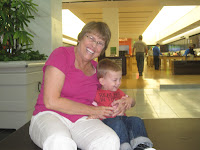 7. Have no expectations other than to enjoy the ride. Kind of like parenthood, ya? They’re two for goodness sakes. The rehearsal may go swimmingly (besides leaping and crashing off the stage a few times) and the ceremony will be a whole new ball game (hello – there are hoards of people and violins and stuff!). And wish like crazy the bride and groom (ok and wedding planner) are laid back enough to go with whatever comes of it…like going down on Momma’s hip, down a gravel path and her short dress, putting on Papa’s for a split second, then get whisked away by Aunt Mary to leap on and off the rocks above during the ceremony. Oh – and not even bear the rings. Let’s face it: it was just safer that way! Then, to spend hours avoiding all the hoopla and finding joy in exploring the railings, fountains and not so much those “boring ol’ speeches”, only to make it into one demonstration of “Ring Around the Rosey” and pass out.

And above all: take it all in and embrace it as one of life’s remarkable, amazing moments. Your little guy will never look cuter than on this day, dressed to the nines, experiencing yet another new milestone in his life in whatever way he chooses. 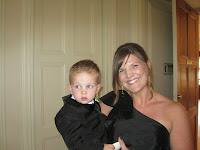 Oh – and hope the photographer gets a really stellar shot because those ring bearers, they’re just not that into sitting still: 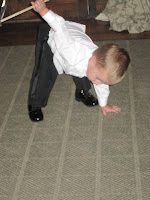 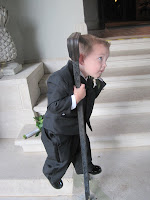 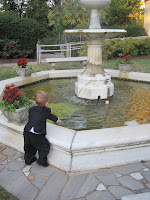 Thank you, Ryan and Erica, for making your nephew a part of your special day. It was such a blast and an experience we’ll spend the rest of our lives cherishing. We’d do it a million times over, for you, for him and for all the joy it brings, that bearing of the rings.
Posted by Meg at Sunday, October 23, 2011