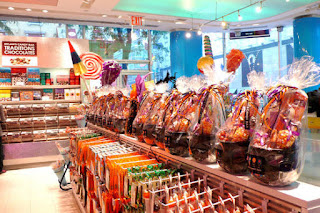 "Those watermelon sour patch kids are REALLY good...but you know there's chocolate over there too, right?" the gal behind the thin plastic counter shares, her dark hair falling over her glasses.

"Do I look like I need chocolate?!" I slightly hiss with a half-smile to my girlfriend who I had dragged along at 8:30 p.m. through the mall just to hit a candy shop. To be fair, I'm the size of a house, so her helpful comment actually made perfect sense. By the way, the measure of a true friend is one you can drag through a set of stores more than once just to grab sweetart lego blocks, gah bless her.

After grabbing an Angry Birds egg of sweets for a certain little dude's souvenir, snagging a few chocolate covered oreos and even contemplating purchasing a reusable cup with the store's logo due to my growing affinity, my total came to nearly $20. For candy. But all my favorite treats nonetheless. A total preggo cliche.

But also totally worth it.

Of all the shops in this amazing mall we've been attached to for now nearly five days, Dylan's Candy Bar is the one I've frequented the most, though Nordstrom is a close second. Rows after bins of delectable goodness that you can mix and match at 12 dollars a pound. In other words, every girl's dream. Particularly if this said girl is eight months withchild. Like Mr. Bulky's on steroids, Dylan's Candy Bar is now on my top five list.

If only they had a frequent shopper card, surely I would've earned some sort of prize by now. Perhaps a pound of Swedish fish and chocolate covered gummy bears?