On Flipping, Leaping and Climbing: The Journey of Organized Sports 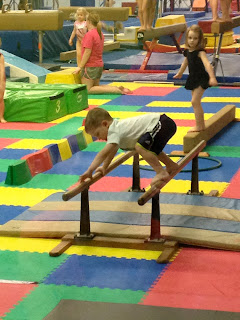 "I don't know honey, I don't think he'll go out there," the hubs said as I began to assess whether he was a) unsupportive of putting little dude in a "girl heavy" sport that is gynmastics b) didn't want to give up Monday night football to attend c) thought this  may be a replay of our soccer season (if you could call it that).

"I know - but it's always worth a try, right? We just need to support him emotionally in whatever he decides and I've prepared him all week. Plus, his friend from school is in there - maybe that will be some motivation," I said as we piled into the car, our son thrilled to be wearing shorts in the 30-degree weather for his first trial at gymnastics.

With no expectations or pre-conceived notions we enter the gym, tiny bodies clad with shiny leotards filling the lobby alive with activity that can only be the speed of what three to five year olds bring. We wait cautiously in the stands as he drives his Matchbox cars along the bleachers, him glancing up every so often to catch a glimpse of a child flipping off the high beam, catapulting on the bars or dancing across a trampoline. Slightly intrigued but not ready to commit, he refused to remove his shoes and focused on waiting for his class mate to arrive, certain he'd find comfort in the familiarity and bravery she'd bring to entering through that door.

And arrive she did, full of energy, support and laughter, the perfect pal to spark the fire that meant stripping off his kicks, grabbing her hand and entering the sweat-filled dome that promised fun, technique and an energy-release so desperately needed after even a full day of pre-school.

For an hour he delighted in following orders, carrying bean bags across his head, trotting backward across the trampoline, diving into a pool of styrofoam cubes and climbing a rockwall as if it was the refrigerator at home. Teen coaches helped him flip over the bars, him exiting only once requesting a drink, then finding himself gathered close to his classmate, feeding off her passion and excitement for something she looks forward to every week. The whole way home he chats how he wants to come back, his favorite parts and of course, questions if J will be there next week. 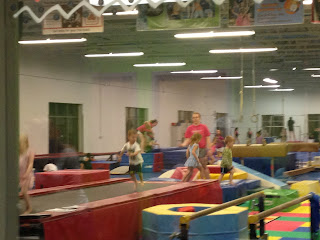 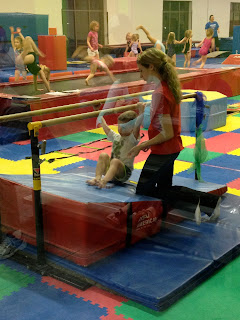 In other words, we thought - aha! He's sold! Parents unite on a sport that isn't too organized, burns energy, is fun and he enjoys with people we know that is affordable!

Forty-eight hours before he began protesting, indicating he did NOT want to go to gymnastics, despite bribes and the comfort J would once again be there. Not deeply invested on whether he go or not (he's three - we have our whole lives ahead to pressure him into things that really matter) we did at least want him to try, anticipating it was his touch of anxiety getting in the way and that after arriving early and reminding him what he loved about it, he'd head on out.

Thirty minutes later, his classmate confused and unable to convince this boy to get on out there, two spindly legs wrapped tightly around his Momma as if he were trying to survive a tsunami, we decided to pack it up and head home to play Transformers. And let me tell you, THOSE plastic dudes were flipping, bouncing and catapulting just fine.

This is when I began to attempt to wrap my brain around: what is the secret to organized sports or general activity? Is there a magic age? A certain kind of a child? The right blend? At times it made no sense to me at all that this child who played nearly six hours of sports daily inside and on the lawn of our home, begging to dress and romp with others around whatever ball he had in his hand, would suddenly protest when it involved a group. A child who delights in the Fit Kids program at school, his teacher advising we never skip his passion so strong. A boy who plays golf, football and soccer so well that adults stop and request our number for when he gets a bit older to serve on their team specifically. And while I have no qualms about taking direction from him when he's ready (or even supporting him if it turns out to not be his thing), at times I long for the outside organization of those activities to secretly relieve a bit of the pressure that is consistently on me to keep his intense and constant level of energy and focus working and preoccupied on the true physical drain of an activity or sport that at times does just the trick. In other words: Saturday morning swim lessons helps wear a boy out!

From the emotional flipping, leaping and climbing of the world of organized sports to the physicality of it all, we will wait. Wait to see which direction his heart goes. Wait to see where his mind decides to take him on his journey. Wait and watch as he does the most important thing a child should be doing at this age, which is learning through play, testing limits and exploring his curiosity, feeling the love of his home and trusted parents as he experiences this world one little bit at a time. Because if we think it's a lot to carry on our shoulders some days, imagine what it's like at three!

Flip. Leap. Climb. Love. Support. Authenticity. Care. Patience. Unconditional. Whether you ever become a little athlete or not...