“So, what are we doing today?” my hairdresser asks, running her hands across my aching skull. “Long bob as usual,” I say, relishing in her fingertips easing the stress of the workday, a sick kiddo and holiday planning. “But go ahead and stack the back a bit more than usual for a little sass – leaving room for Ms. Ponytail, a mom-must-have,” I say. “Got it,” she acknowledges as we head toward the little sink lined with gorgeous cleansers and conditioners with just the right amount of accessories for a trendy salon.

The rest of the appointment goes as you might expect…sharing hot celebrity gossip as if Jennifer Anniston was our friend, discussing drama in our personal lives as if we’ll never cross paths with one of the people in question, and a whole lot of fluffing, straightening and spritzing to top off our time together. She passes me the hand mirror with a half-grin and asks, “well, what do you think?” To which my response was, “perfect as usual,” and a debit card is exchanged between the two of us satisfied customers.

A peruse through the OPI nail polish and a stroll to the car later, I dance at the stop lights and look forward to going home to my little fam. Pausing one second longer in the living room to see if hubby will notice THIS haircut, I chuckle to myself as they carry on with life as usual and I make my way into yoga gear (my version of sweatpants). Deciding to make my hair match my outfit for maximum wrestling with the son, I fish for a hair tie and prepare to pull it back into a ponytail. Aiming my hands behind my head, I grab once, twice, three times a no ponytail. Impossible, I think. It doesn’t look that different. One more attempt and a few hairs poke through the holder, lasting for no longer than my jaunt across the bedroom. “Aaarrrggghhhh!” I say to the boys, who look at me, not unusually, like I was crazy. To top it off, hubby says: “why’d you cut your hair?”

Don’t worry, I’ll make it. I’m not THAT high maintenance. But I gotta admit this cowgirl sure could use the pony so as not to have to add hair preparation to her daily to do list.

But it could be worse. Look what the groomer did to poor Ellie. Wonder what she wanted to bark when the gentleman asked, “and what are we doing today?” 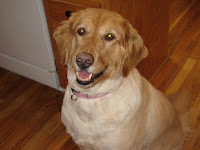 Ashamed. Acquired. But you gotta admit…amusing.

See you in six to eight weeks? Better make it 12. And for the dog that looks like she could be Ellie…see ya next summer. And El – I owe you one sassy collar to make up for the white nakedness that has become you. Nose kisses.
Posted by Meg at Sunday, April 04, 2010