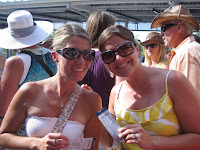 “What is this-round five?” I ask as we brace ourselves in the backseat while B makes her way effortlessly and confidently through bouts of stadium traffic. “Yah, close to that,” said Kel, her eyes never leaving the terrain as she suggests her sister apply the brakes.

Giggling uncontrollably and chatting like a pack of sorority chics (wait, I guess we were those), we reminisced on our Kenny Chesney tours and how much we’ve changed over the years, going from morning to night tailgates to now dressing light and comfortable and sipping water. From talking up boys and purchasing tees with Kenny’s biceps silouhetted on them to now saying things like: “they want HOW much for a t-shirt? Isn’t there one more plain?!” And from waiting eagerly outside his trailer to now passing on rumors that he just isn’t that cute up close and can be kind of an ass. Ah, adulthood.

Regardless, it was a total blast, scoring killer seats 30 rows in on the football field, within arms reach of his soulful tunes, fun spirit, good sense of humor and oh – Billy Currington – a dude that’s quickly moving up my crush list.

So thanks again, Kenny crew, for this memorable time and many more to come.

And as the little dude would say: “rock on, Kenny. Rock on!”

PS: One rant: I dedicate these words to the fine couple sitting in front, er, like a foot in front of me.