Where's That Dude in the Skirt? 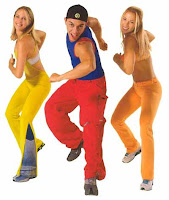 “Seriously, I think you’re going to love it – and I promise you’ll catch on. Plus, I’ll be there to help you and it’s ridiculously fun!” I tell my new workout buddy Diane, catching the fear in her eyes at the mention of the word “Zumba.” At least a decade older than me, fresh to the workout circuit and not that keen on the dance scene, it was a hard sell, but we arranged for a Sunday date.

And that’s when it started to slightly go downhill.

Studio 2? No where to be found with an efficient staircase so I make my way several times around the building, of course passing by several glass-encased rooms filled with sweaty bodies wondering what the heck I’m doing. Had they known me better they would be aware I’m incapable of finding my way out of a box. Wait, I bet they figured that out by then…but at least I provided a good distraction from what was starting to look like a near-death by push-ups session.

When I finally stumble across the correct room, it’s lined with what appears to be spunky women right out of a “Women’s Health,” so find relief in the fact there’s still a spot in the back. My eyes dodge around the lean biceps and perfect ponytails desperately searching for Diane, who has yet to make an appearance. Maybe she’s locked in the stairwell frantically searching for Studio 2 too…

Suddenly, the room breaks out into beats which I totally feel given that I still hold on to the belief I was black in my past life, and I see those perfect little ponytails poise in preparation as the Erin McAndrews look alike starts gyrating in front.

Wait…why isn’t she giving any instruction? What the….turn…sway…fist pumps…and my heart rate is already in zone 3? I thought we were warming up?! Am I supposed to know what a samba is? What is happening?

Did I tell you I danced for years including hip hop, jazz, ballet, tap and freestyle? I mean, what were all those countless hours “in da club” at KU for if not this? And still here I was, clueless…

Just then Diane joins us, dropping her water and towel nearby and sharing a look with me that could only be interpreted as “what the hell did you just get me into?” All I could do was apologize with big eyes, then turn a few beats too late and nearly whip into the gal next to me who apparently like the rest of the class attendees made this her Sunday ritual instead of getting 1:1 with the big man.

As we muddle through and spend most of our calorie burning trying to interpret the instructor’s 3.5 second hand signals explaining the whole routine, I began to miss the dude who taught the first Zumba class I ever went to and who I think is responsible for unearthing my youthful spirit. I mean, the dude had costume changes (think neon sunglasses, belly dancing skirts and fedoras) and had a total hip hop feel, complete with helpful instruction.

Yah, so not the case here.

But as they say, as long as you keep on moving, it’s all good.

Yeah – tell that to the gal next to me who practically booty shook me off the dance floor in frustration with my inability to mind read which step was coming next.

So dude in the skirt, if you’re out there, please come back. Zumba is calling.

Along with the gals who thought they could pull it off but just can’t.